I am so sick and tired of hearing from old white men about how to behave and how I should live my life. They have had their chance to run/ruin the country; they should step aside and let the next generations have their turn.
When I read that someone in power in some part of the government also worked in a position of power in the Johnson or Nixon administrations, I am floored. I suppose it is possible that they are still up on the pulse of the country, but I doubt it. (Is that ageist of me? I suppose so, but when your publicly expressed social views sound like they are straight out of the 1950s, then you deserve to be judged accordingly).
Posted by Hope at 2/29/2012 01:51:00 PM No comments:

Whirlwind of a weekend

Well, that was a busy weekend. Benjamin was out of town Friday and Saturday at a conference, but I didn't really have time to notice. Between my normal weekend chores (groceries, laundry, walking dog) and tennis (outdoors! in the sun!), I was plenty busy, and then I also attended a baby shower for a friend, baked bread, made an apple pie, played extra tennis, and made soup so we could feed our friends who came for dinner.

Ordinarily, I would have made the pie crust by hand, but in addition to the bread I baked on Saturday, I also baked biscuits for biscuits and gravy at breakfast time on Sunday, and had no desire to (a) get my hands all covered in sticky dough again, and (b) clean the counter after I got sticky dough all over everything. (Actually, there probably wouldn't have been much dough on the counter, since I roll out pie crusts on wax paper, but since it was a double crust, it was going to be twice as much work, and I had had enough baking for one weekend.) The filling was some I made in the fall and froze. I hadn't tried it out yet, so I was relieved that it worked really well, and tasted like apple pie and not freezer cooties.

The extra tennis was great. I subbed in a friendly match for a friend, with a friend, and since the weather was nice, we got to play outside. Now that I have been playing for awhile, I can say without a doubt that outside tennis is the way to go. Even with the wind and the sun in your eyes.

And the dinner with friends was great fun. Miikka got to play with a 4-year-old who had at least as much energy as he did, and the adults got to talk and eat good food and drink cocktails (well, not me, but everyone else).

Why does the early morning have to be so early?

After a couple of weeks when I barely made it out of bed or off the couch and another week where I get around, but with much coughing and wheezing, I am finally recovered enough from my evil cold to go back to the gym. Which is...great? I like to get exercise, I generally feel better when I do, but man oh man, getting out of bed at 5:15 AM, after not doing so for weeks, is awful. Getting up super early hasn't always been difficult, although if you have been following me for a while, you will know that it is a periodic problem that I tend to whine about. Lately, I suspect the reason is the infant-inconvenience - I just need more sleep now than I usually do. That, and it is just cold and dark out and my bed is warm and soft. No matter the difficulties, I have managed to drag myself to the gym every day this week (Monday sort of doesn't count though, because I had the day off and was able to go at a much more civilized hour).

And I need it, since my tennis team is starting up again for the season, and I have to be in good shape for my singles matches - so much more running around than in doubles! And I intend to play singles for as long as possible this spring. Most people I know actually like playing doubles better than singles - I tolerate it as a necessary evil, since it means I get to play more often than if I was only playing singles. I like that feeling of intensity as I am running around the court, of a one-on-one battle with my opponent, and of not having to feel bad that you ruined the game for your partner. That one is key with me, since I am not particularly good at doubles; I always seem to move the wrong direction, which means I am often out of position for a ball I am supposed to hit. I'm working on that, and may actually be improving, but for now, give me the whole court to myself. Which, in a nice, circular way, leads me back to the gym. And 5:15 AM. Sigh.
Posted by Hope at 2/22/2012 01:47:00 PM No comments:

Why does it all have to be boy/girl?

So, I have begun putting together a baby registry, and I have noticed something that is driving me crazy. Well, there are many things about baby shopping that are driving me crazy, but this one mostly just makes me mad: the virulent need to gender-ize everything that is sold for babies. I get (although I don't like/agree with) the clothes, and some of the toys - pink for girls, blue for boys - but does everything have to be labeled boys or girls? I mean, the baby bathtubs, play pens (yeah, yeah, the correct term these days is "playards" but that is so inelegant and stupid I refuse to use it), bibs, washcloths, diapers, car seats! All seem to have a built-in implied gender. Washcloths? I saw two sets, one primary colors and the other pastel. The first was labeled "boys" and the second "girls." Why? Why not just say "primary colors" and "pastel"?

This is kind of a language thing for me, and kind of a feminist social issue. Colors don't have a gender, neither do bathtubs, washcloths or car seats.

A baby doesn't know or care what gender it is. Gender is a socially constructed idea, not a biological fact. So why start enforcing that stereotype so early? I'm not saying that people who like to dress their daughter in pink shouldn't be allowed to do so, but I am saying that it isn't necessary to only have a pink bathtub for girls and a blue one for boys. Whether intentional on the part of marketers and manufacturers, such starkly binary distinctions limit the range of options open to children as they grow and explore, telling them that something is not for them because of their gender. Don't believe me or think I am exaggerating? Check out this great set of videos from Feminist Frequency about LEGO and gender for a sort of introduction to the topic.

I want my child to know that every potential career, hobby, and color is available to them, regardless of gender. To that end, I am making a conscious effort to only register for gender neutral items - there are plenty of cute products without resorting to pink and blue, you just have to hunt for them.
Posted by Hope at 2/16/2012 01:56:00 PM 1 comment:

A walk in the woods 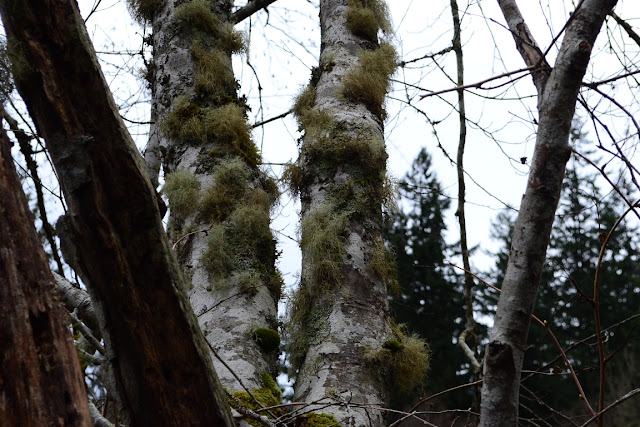 One day during our visit to Washington, we went for a walk at a new park out near Woodinville. It was a gray and damp day, as usual at that time of year, the type of weather that makes all this moss and ferns possible. 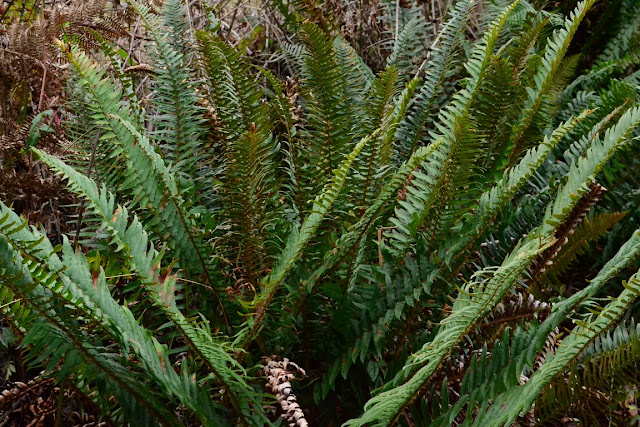 When I was a child, I was always highly amused at visitors from other states who would express amazement at how green it was in Bellevue. Now I get it. After 6 years in Texas and 3 1/2 in Arkansas, I get it. Here, everything goes brown in the summer and winter. 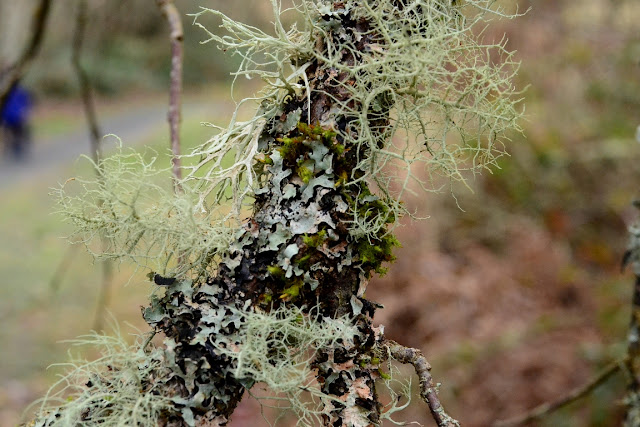 Not in Washington. There was moss on every immovable surface on the walk, except the paths, but only because they were brand new. 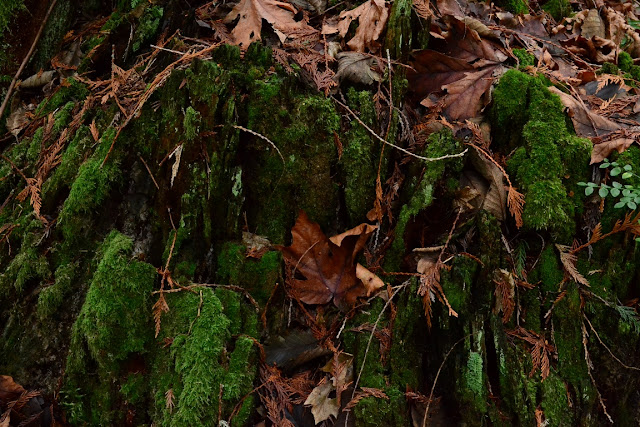 Believe it or not, there was a stump under that carpet of moss. You know that old saying about how you can tell which direction you are going in the woods by finding which side of the tree the moss is growing on? Not in this forest. 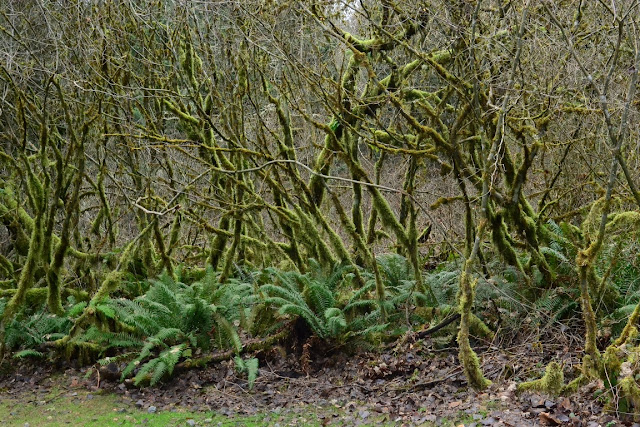 In other news, I am still in recovery mode from last week's nasty cold. Still coughing, especially when watching something funny on TV (like George Carlin), and still blowing my nose too often. But I made it to the gym this morning for the first time in almost two weeks and managed a tennis class yesterday. Whew.
Posted by Hope at 2/13/2012 03:04:00 PM No comments:

OK, this is getting old

You are getting Miikka pictures because I have spent four of the last five days on my couch, and he is the only bit of scenery I have had lately. Why would I do such a lazy sort of thing, you may well ask? Because I have a cold. A mean cold that was deceptively mild at first, then started to get nasty. I mean, after spending Wednesday afternoon and Thursday lolling around in a state of malaise, Friday morning I thought myself if not fully recovered, at least well enough to return to work. Wrong - by Friday evening I was worse than I had been, with an unpleasant cough to boot. That cough and its friend sinus pressure stuck around all day Saturday and Sunday, and are just now starting to recede (fingers crossed that they are indeed going away). The thing is, I can't tell if this cold is worse than any I have had in recent years, or if it is just that I can't take any of the most expedient cold remedies on account of the infant inconvenience (to borrow a phrase from one of my favorite novels) and thus just feel if more keenly. Either way, I hope the cold is on the way out, because my couch is starting to feel molded to my body. And as much as I enjoy being home during the day and having the dog sit on me all the time, I am ready to be up and about.

I actually won something! 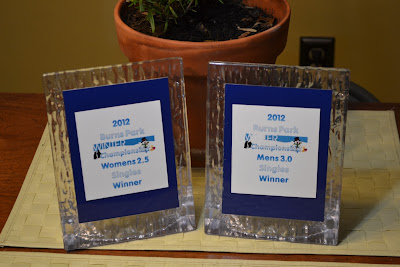 Wahoo! The tennis tournament was a success! Benjamin and I both won our divisions for singles. I think this is the first time I have won anything athletic since I was in elementary school and swam on a neighborhood swim team. I mean, I have won matches, but never the three in a row needed to win a tournament. We both had one match that was fairly easy, one that was long and difficult, and one that was difficult, but not quite as long.

And now, because the world needs more cute pictures of Miikka, here is one of him in the magic sunbeam with his favorite toilet paper tube scrap. 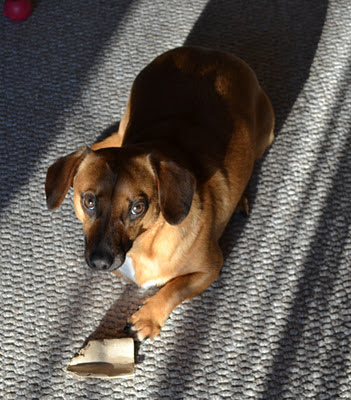