Here are some more pictures of Malcolm, now that he has been home for a week. We are all getting adjusted to the new reality - lack of sleep, changing diapers in our sleep, someone new to care for and love - and watching the Olympics. Now, if only it would stop being so hot, so we could take him out for walks. Seriously, it was 111 yesterday, the 3rd hottest day on record in Little Rock - not just for this year, but since they have been keeping records. Ugh. 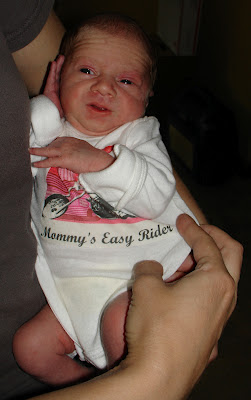 Not sure about the paparazzi. 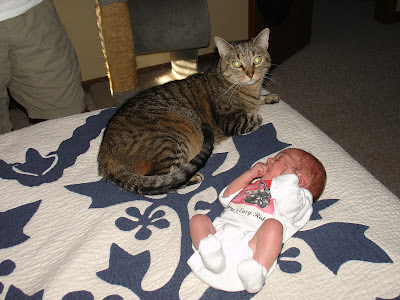 Some day, he will be bigger than Oliver, and it will be hard to believe he was ever this small. But not yet. 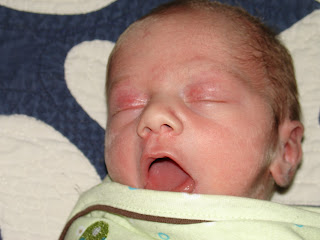 So, yeah, I haven't updated the blog for a while. But I have a very good reason this time - I have been rather busy giving birth and all, and dealing with a whole lot of unexpected side trips on the journey from pregnant lady to mother.
My water broke around 2 AM last Tuesday, almost 3 weeks early, and as we had planned, I spent most of the day at home, waiting for active labor. For most of the day, I was without contractions or other problems. Obviously, I hadn't been planning on having a baby that day - I was supposed to have a baby shower at work, for Pete's sake - so I had a few things I wanted to take care of before heading to the hospital. I cleaned Kirby's cage and processed half a box of peaches for the dehydrator. What?! I didn't want them to go to waste! In the late afternoon, my contractions started, so we headed to the hospital. By 8:30 or 9 PM, my contractions hadn't really gotten very strong, so the doctor on call (who was not my normal doctor) said I could have an Ambien and try to sleep until morning, when my regular doctor would be available. However, the Ambien relaxed me to the point that my contractions started getting pretty strong. Since Ambien is supposed to put deeply asleep (it is one of the sleep drugs that makes people sleep eat and drive and other wacky things) I spent 3 or 4 hours in a hallucinatory sort of state, kind of awake but also kind of dreaming and seeing things during contractions and passed out in between. I started pushing around 3 AM, and Malcolm was born 25 minutes later, beating the doctor by a couple of minutes.


After spending about an hour with us, a routine blood test discovered that he was hypoglycemic and very cold, so he was taken to the NICU to get an IV and some warmth. Because he was a bit early and so small - 5 pounds, 3 ounces - he just didn't have enough body fat (takes after his father that way) and glycogen reserves that a normal 40 week baby should have. That and a few other minor-ish problems (minor in the grand scheme of things, major to a brand new parent deprived of her baby) that made the doctors cautious, he ended up staying in various stages of the NICU until yesterday (which meant so did I), when we were finally allowed to bring him home. Now he can be treated like a normal baby - hurrah! He shouldn't have any lasting problems, since they were all basically because he was 3 weeks early and not quite ready to be out in the world, and not anything disabling or systemic.

We are overjoyed to be home as a family at last. Benjamin is glad to not have to drive back and forth to the hospital every day to see us. I am especially glad to be done with beeping monitors (that went off all. the. time.) and decent but bland hospital food! For the record, I refuse to acknowledge the validity of calling anything made with Jell-o a salad, no matter how much fruit is in it.

Oh yes, Benjamin Malcolm Rider is the 11th Benjamin Rider, and will go by his middle name. Yes, he is partially named after Malcolm Reynolds, captain of the Firefly ship Serenity. Yes, we are big geeks.
Posted by Hope at 7/24/2012 10:15:00 AM 5 comments:

Later this month, my grandmother Betty Jean turns 90. Since I will probably be preoccupied by a baby or an impending baby around the actual date, I wanted to wish her a happy birthday a bit early. Besides, by 90 I think you should be able to celebrate for a whole month, don't you? Here are a few pictures - from her wedding day to my grandfather, and from this past year.

She grew up on a farm in Nebraska during the Great Depression and went to college at Hastings College, where she met my grandfather. She left after two years to teach - during the war they needed teachers and she needed money.

After the war, she and my grandfather raised three children. When my mom (the eldest) was in high school, Grandma went back to college to finish her BA, then went for her masters while teaching elementary school. Eventually, she was a reading specialist (like my mother) and taught for 20 years. She is the daughter of a school teacher, her daughter was a  teacher and librarian, and my cousin is a teacher. Who knows what the next generation will bring (currently at 3, with 2 more soon to arrive), but I bet a teacher and/or librarian will be among them!


After she and my grandfather retired, they spent many years traveling the world, having adventures hiking and bird watching. She even hiked the Grand Canyon in her 60s, twice! 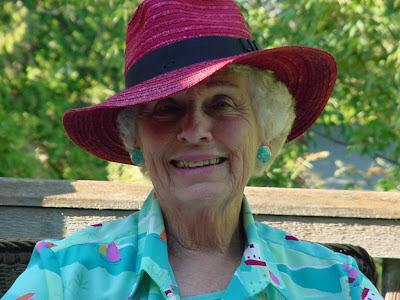 When each of us grand kids was old enough, we got to spend a week with Grandma and Grandpa, alone, doing fun things with them. On my trip, we rode the steam train up to the Grand Canyon and went on hikes around Sedona, where they lived.

Huzzah! We had rain yesterday, real, honest-to-goodness rain! The street gutters were overflowing in small rivers at lunch time, and again when I got home in the afternoon. The trees and bushes in the yard no longer look sad and dry and bedraggled, and when I got up this morning, the ground was still wet! It wasn't enough to get the state out of a drought or extreme fire danger, but it was enough that I don't have to worry about watering for a few days. Ahh...
Posted by Hope at 7/10/2012 10:33:00 AM No comments:

So, it is hot here in Arkansas. Yup. We've been right around 100 degrees for most of the last two weeks. At some point, we were hotter than Phoenix. Benjamin has decided not to let the heat stop him, since the world is warming and it will likely be this way every summer from now on, and played tennis 4 of 5 days this week (and then wondered why he was so drained, and ate 1/4 of a large watermelon in one sitting). If I wasn't quite so pregnant, I might be doing the same, but as it is, I can barely stand to walk the dog around our hill at 6 in the morning when it is only 75.

To go along with the heat issues, one of our city's wells has failed, and while there is plenty of water for home use and fire fighting, the water company has put in place a water conservation plan until a new well comes online. This means we aren't supposed to water our lawns or use irrigation systems at all. Now, we never water our lawn, but we do water all the bushes in the yard, not to mention the vegetable garden. I was told, via email, that I could water the vegetables and not be cited for non-compliance as long as nobody complained, but when I went to fill a watering can last night, the outdoor water had been turned off. I think we can turn it back on, as long as it isn't locked, but I'm not sure why the company felt the need to turn off the water. I assume they turned everyone's water off, maybe to drive home the message, but it seems a bit much.

I am seriously considering planting cactus and other desert plants that don't need any water. Stupid drought.
Posted by Hope at 7/05/2012 04:16:00 PM No comments: