It has been a busy spring around here. There has been tennis, of course, and I ran the Little Rock half marathon for the third year in a row (it was cold and wet and not my best day, but I finished). 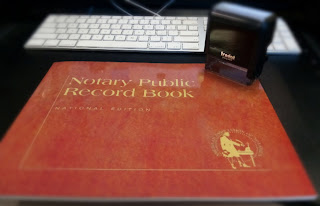 In March I completed the requirements to become a Notary Public. At the library, we get a lot of people seeking a notary, and we only had one other librarian certified, and he is often off on other business, so I figured it would be a good idea to get certified myself. So far, it has been a good investment - I've notarized something every day I have been at the office since I got my stamp.

Malcolm has been enjoying kindergarten and is learning so much. Every day I am impressed by how much he has grown in the last year. He is beginning to read (which means we can no longer spell in front of him to hide what we are saying!) and add and subtract. But the most exciting thing has been watching him on his new bike. At the beginning of spring break we bought new bikes for him and for me, to replace his outgrown balance bike and my old, heavy mountain bike. Hands down the best purchase we have made in a long while. Thanks to all his experience on the balance bike, Malcolm didn't need training wheels and was riding without any assistance after just a few minutes. It took a few more practice rides to get the hang of starting by himself, but now he is riding like a pro.

It has been wonderful to have a new outdoor activity to do together. And again, I am so impressed with Malcolm. He has had a couple of crashes, but always gets back on the bike and keeps going. And he has stamina! For my birthday, he and I went on a bike ride together on the River Trail, and ended up going SEVEN miles in an hour. It was cold and windy that day, and I hadn't planned to go that far, but every time I suggested heading back to the car, he wanted to keep going. So we did. He was tired by the end, but he never complained or gave up. It was a great birthday gift.

Grandma Candi came to visit over spring break, and one day we took a family trip down to Garvan Gardens to see the tulips. So many tulips! Unlike the tulip fields in Washington or the Netherlands, the tulips at the gardens are planted among the trees, so you don't get huge stretches of colors, but you do get some lovely groupings and an idyllic stroll through a blooming forest. 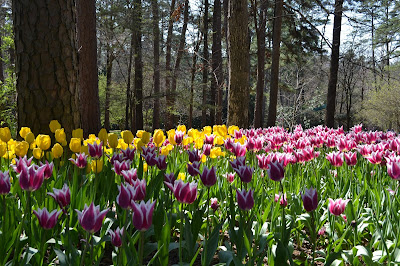 It was a lovely day and the flowers were at their peak. We spent several hours just wandering, taking pictures and admiring the flowers. 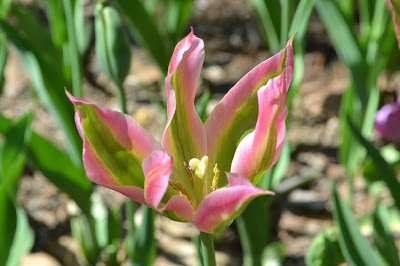 Weather-wise, this has been an odd spring, with freezing temperatures followed by an 80 degree day, followed by rain and more rain. On repeat. But it is finally feeling like real spring (and the pollen is coating everything in yellow), and it is lovely.

How did it get to be February already? It seems like we just finished the holidays! Since the year is already getting away from me, I am a little late with my reading roundup for 2017. Oh well, better late than never. Here goes:

In 2017 I had a goal to read 75 books (not counting the picture books and so on read to Malcolm) - I read 80 (a couple of those were chapter books read to Malcolm, but since they were actual books, I let them count). I am pleased with my total, especially since I started working a month into the year and my free time declined precipitously. I didn't keep track, but I suspect the number went up from 2016 because I have been listening to more audio books during my commute every day. I can read faster than I can listen, but I can't read while driving, so audio books are a great solution. I didn't break the books out into categories, but I definitely read mostly science fiction and fantasy this year. Probably because the news is so dreary and dreadful most of the time that I need something to take my mind somewhere else entirely, even if that world is even more wrecked than our own.

For the last two years I have had goals to increase the diversity of the perspectives I encounter by reading more books by women, minorities, and non-US/British authors, as well as more poetry. In 2016, about 60% of my books were written by women; 2017 was about the same, with 63%. I am actually a little surprised about that - at times it felt like I went weeks without reading any male authors. But I am pretty happy with 63% and aim to keep the ratio about the same for this year.

In 2016 I read only eight books by minorities - six of which were by two authors - and I made a very concerted effort to increase that number in 2017. I was pretty successful - I increased the total to 21 books by minorities, one quarter of the total books. There was some duplication of authors, but not much. In 2018, I want to keep seeking out diverse authors and hope to get closer to 1/3 of my books.

Foreign authors is still a hard category for me and needs improvement. I only read five books by non-American/British authors - one Cuban, one Japanese, two South African, and one Nigerian. One of the American women I read is also Nigerian, but since she was born in the US and lives and works here, I didn't count her in the foreign category.

Poetry: I only read two full books of poetry this year, but I did read all the poetry every month in Literary Mama, and occasionally dipped into favorite books of poetry for short snacks. I don't think this category is every going to be a big one for me - poetry just isn't something that I connect with regularly, even though I do enjoy it from time to time.

Favorite books of 2017 in order read throughout the year:
Underground Railroad by Colson Whitehead
Invisible Library by Genevieve Cogman
Binti (and its sequels) by Nnedi Okorafor
The Hum and the Shiver by Alex Bledsoe
The Woman Next Door by Yewande Omotoso
The Collapsing Empire by John Scalzi
The Heist (and the other four books in the Fox and O'Hare series) by Janet Evanovich
Shadowshaper by Daniel Jose Older
The Stone Sky (The conclusion of the Broken Earth trilogy) by N.K. Jemisin
Provenance by Ann Leckie
Artemis by Andy Weir

There were a lot of pretty good ones that I didn't put on this list too. You can find my complete list of books read in 2017 on my Goodreads page.

It's been a minute

As they say around here. I can't believe 2017 is almost over and my last post was back in May! So, a quick catch-up post, before my annual end of the year round up. A bulleted list, I think: