I've tried to start this post several different ways, but my brain just keeps going back to "Woo! I ran a 10K! I ran a 10K!" On the scale of athletic accomplishments, I know it isn't huge - just the result of consistent training - but as someone who used to loathe just the idea of running, I am pretty excited.

I accomplished all my goals: I finished, I didn't have to walk at all, and I even enjoyed myself. For those of you who care, I ran it in 1:07:12, around a 10:50 mile pace. That is a slower pace than my fastest 5K, but then I was running with a more experienced runner friend, and she helped push the pace. It is faster than I think I have been running on my training runs, especially the ones where I pushed Malcolm in his stroller. I am not certain about that though, because I don't have anything remotely capable of telling me my pace, not since I lost my only digital watch on a run back in late January.

It certainly helped that the course - two laps of a circuit around some of the eastern parts of downtown Little Rock - was a lot flatter than almost anything I ran during training. Any long run I do in Maumelle has at least a couple of really steep hills, not to mention the hill I walk up at the end of every run just to get home. I was super happy that I was never even tempted to start walking. The weather also helped; it was cool and gray, but not raining. Just about perfect running weather - a lot better than the first 5K I ran when it was at least 80 with 80% humidity at the start, and a lot better than the last 5K when it rained the entire time.

So, to recap - I ran a 10K, it didn't suck, and now I want to do it again! I think 10K is just about right for me at this point. I could probably do longer runs, but with Malcolm around and tennis as my main sport, my training time is somewhat limited. I can do a long run of 6 miles on the weekend without much trouble or disruption to the other adults in the house, and the weekday runs aren't so long that Malcolm gets bored riding along in his stroller.
Posted by Hope at 3/15/2014 03:03:00 PM 1 comment:

Email ThisBlogThis!Share to TwitterShare to FacebookShare to Pinterest
Labels: running

Uh, about that Spring... After a week of nice spring weather, winter reasserted itself. Sunday started cold and gray and rainy, and got colder as the day went on. By dinnertime, the rain had turned to freezing rain and sleet. All that white stuff is accumulated sleet, not snow. 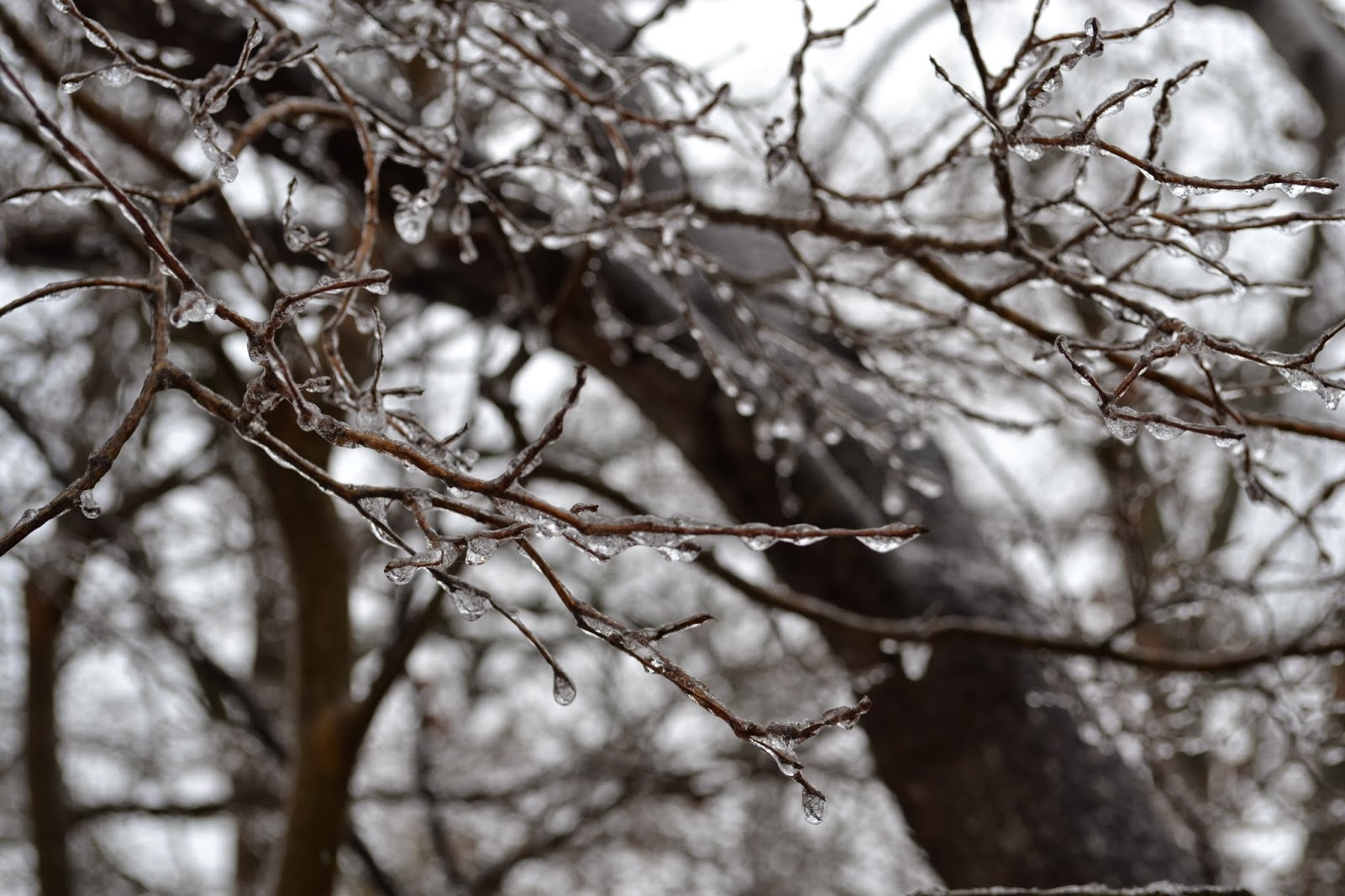 The ice coats everything it touches, and is much, much harder to get off than snow, especially from your windshield and the roads. The main streets in town were treated, but all the side roads, including ours, were left alone. In front of our house, the street looks like an ice rink. 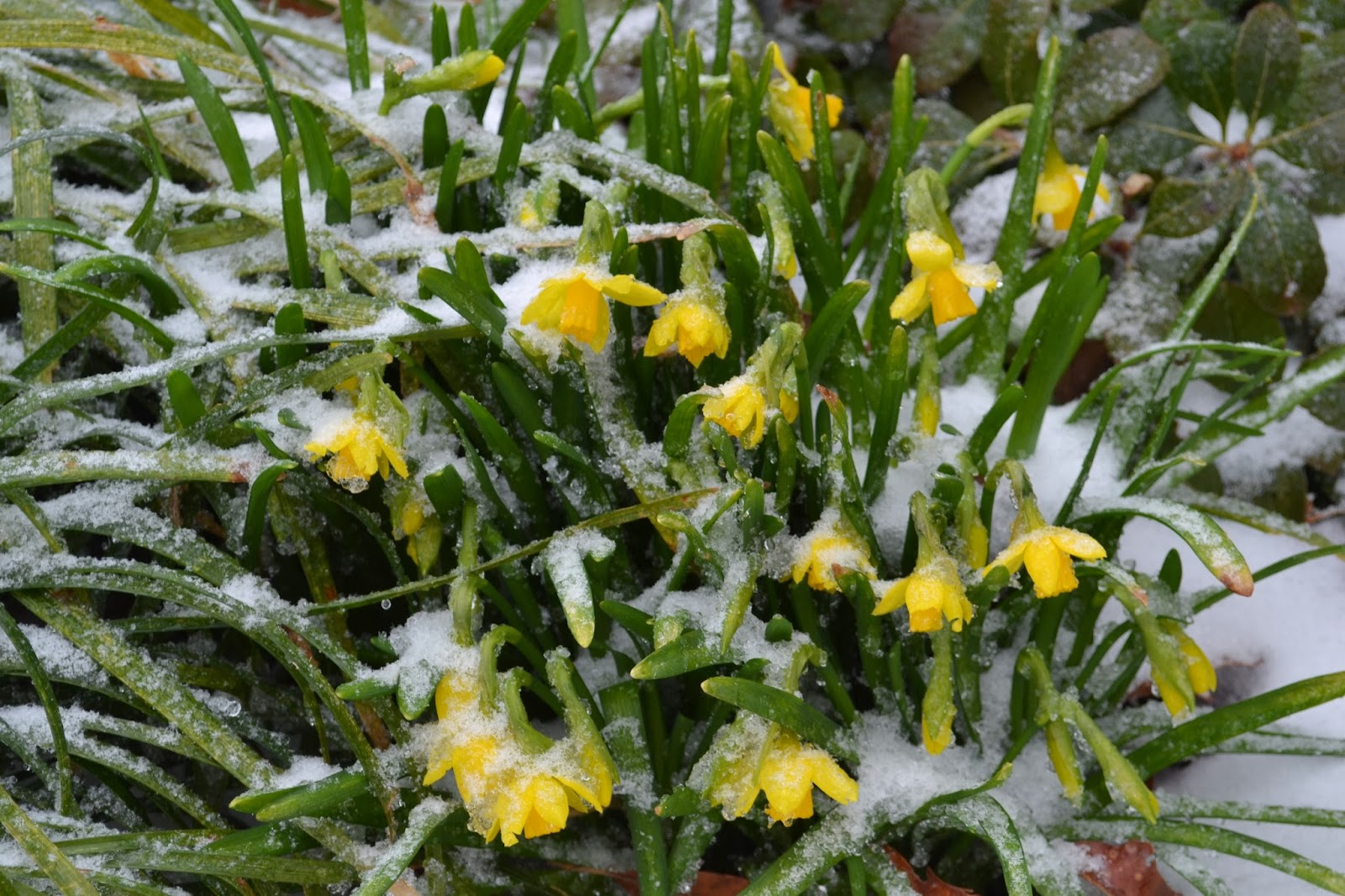 These poor miniature daffodils were just starting to bloom when the storm hit. Luckily for me, they were only the first little clump - the majority have yet to bloom. I am hopeful that the rest survived to bloom once it warms up. 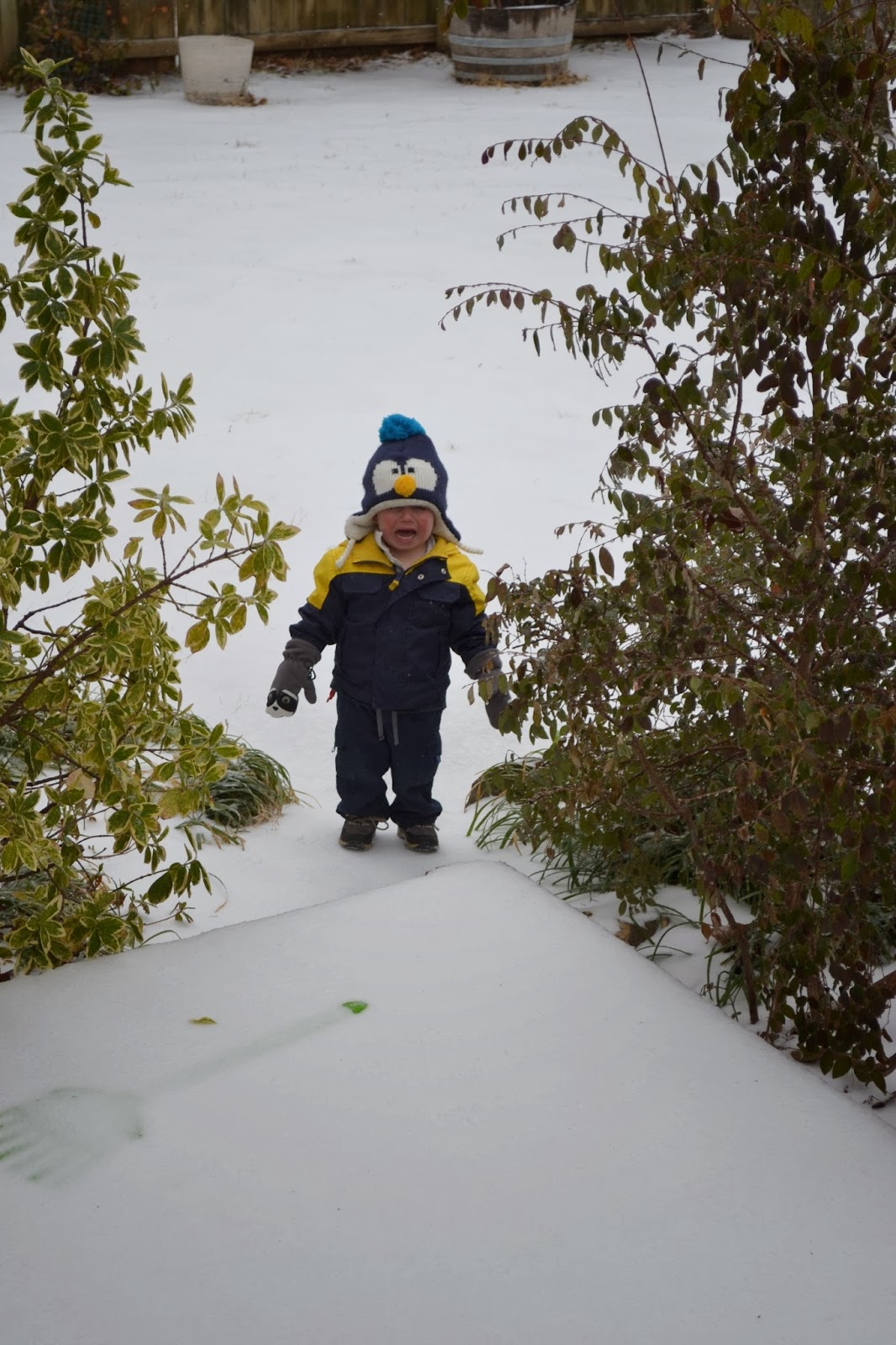 Malcolm is not a fan of the ice (or snow, for that matter). His expression mirrors Benjamin's feeling on the matter as well, since he has had classes canceled 4 times now for bad weather. Lets just hope this is the last of winter and that we can get back to our regularly scheduled spring!
Posted by Hope at 3/04/2014 08:26:00 AM 1 comment: