It has been raining here in Central Arkansas for the last four days. And when I say rain, I don't mean the gentle drizzle that counts as rain in the Northwest - I know that kind of rain, I grew up with it, and while it can put a damper on your mood, at least it is generally easy to ignore as you go about your daily life. No, we have had about 4-6 inches of rain, in heavy downpours and steady showers. There is a pocket park at the bottom of our hill - just a basketball court and a walking trail really - set into a bowl where all the water drains. It has flooded twice now in the last two weeks. Our backyard and front yard are just mud puddles, squishy, messy, mud puddles. But, in theory, the sun is coming back soon, and maybe we will dry out a bit.

Being a good Northwesterner, I didn't let the rain stop me from running this week. How could I? It was the first week of my half-marathon training plan! I might get lazy later, I might have to take a break for an ice storm in January, but no way am I letting rain wash out my first week! So I put on my old rain coat (not really made for running, but it worked well enough) and slogged out the door. I am super excited about running the half in March. The farthest I have ever run was 10 miles, while training for my last 10K (6.2 miles), and when I finished that run I said to myself "I am glad I am done for today, but I could totally run another three miles if I had to!" And now I will get that chance. I am also excited because I will be raising money for a good cause: brain cancer research. Some friends of mine have set up a fund raising team and gathered close to 100 friends to run the Little Rock Marathon, half-marathon, 10K and 5K to raise money. Check out the link and think about how much you want to give me, because after Christmas I am going to come back with my hat in hand, pestering and begging you for money. Don't think I won't.

And now, because it is officially the Christmas season, and because it is raining and you need something yummy to perk you up, it is time for snack mix. I love snack mix, and while I might occasionally make it at other times of the year, December just isn't right if I don't make a couple of batches. How much do I love it? I made a batch last week - using an entire box of cereal - and it lasted two days. Malcolm and I ate almost all of it ourselves. I had to make another batch this weekend. So, without further delay, here is my recipe for snack mix: 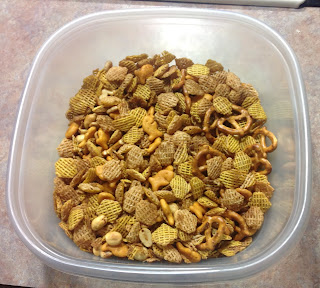 Crispix snack mix, modified by Hope
*I have doubled the original recipe, because the smaller amount just isn't worth it. The amounts of cereal etc. are all approximate, depending on your own personal tastes and preferences - adjust as needed.

1 box Crispix cereal, or approximately 13 cups rice and corn Chex
1-2 cups Cheerios
1-2 cups cheddar Goldfish
1-2 cups peanuts
1-2 cups pretzels (I usually use sticks, but the mini twists work well too)
6 tablespoons butter, melted (the original calls for margarine, but, ugh)
1/2 teaspoon garlic salt
1/2 teaspoon onion salt (I usually use onion powder instead, because that is what I have)
1 teaspoon Penzey's Greek Seasoning mix or Brady Street Cheese Sprinkle (Optional: this is a new addition, and it is quite nice, but the mix is just fine without it)
4 teaspoons lemon juice
8 teaspoons Worcestershire sauce

Preheat oven to 250 F.
1) Combine the cereals, Goldfish, peanuts, and pretzels in a large roasting pan. Set aside.
2) Stir together the remaining ingredients. Pour over cereal and gently stir until the cereal is evenly coated.
3) Bake at 250 F for an hour, stirring every 15 minutes. Allow to cool - this is important, since the mix will not taste good at all when very hot. Eat. Repeat.

Although it has taken its time this year, Autumn is finally really here in Arkansas. (Do I say that every year? It is possible - I grew up in the north, and fall is supposed to come around the middle or end of September, so my reference points are always a little off for living in the south.) I finished raking the backyard last week, and just about the same time I did the last several years (at least according to my Facebook posts for those days). The front still needs it, but now it is raining, so I get a reprieve. Cooler weather seems to be sticking around, and it is raining regularly after months of drought.

Other signs of autumn:
* The state tournament for my combo tennis team was this weekend (we won!!), so now starts the inevitable lull, with only a stray singles match or lesson from time to time, until the regular season starts up again in the spring. I suppose it is good for me, but it can make me antsy, not playing several times a week.
* Project FeederWatch began over the weekend, so Malcolm and I are once again watching our bird feeders with heightened interest, as we count our avian visitors. I am excited this year, because Malcolm can really, truly participate now. Last season, he watched with me, and could pick out birds, but this season, he knows what he is doing, and he is excited too. We started our count today, and I had forgotten the thrill of spotting a new bird for our weekly list, even if it is just a white throated sparrow or chickadee.
* Soup. Maybe it has been soup season for a while now where you live, but here, we are just getting to the point where I feel a need to make a pot of soup at least once a week. I have a lot of soup recipes, and I try to make different ones, but of course we have favorites. Last night we made Lentil Soup with Swiss Chard, Sausage, and Tubettini. It is an Italian recipe that my dad passed along years ago, and I am not sure which cookbook he got it out of, and even though there are many similar recipes out there on the internet, I think it is worth passing along. Just in case you too need soup.

1) Place the lentils in a large pan or soup pot with the broth and water, celery, bay leaf, and salt. Bring to a boil, then reduce to a simmer and cook until the lentils are nearly tender, about 20 minutes.

2) Meanwhile, in a skillet, combine the olive oil, garlic and onion. Saute over medium-low heat until softened, about 5 minutes. Add the sausage (and fennel) and saute for 10 minutes until golden.

3) Dissolve the tomato paste in a little of the lentil broth. Add to the sausage and onions and stir well. Add marjoram and tomatoes and stir.

4) Stir the sausage and onion mixture, the tubettini and Swiss chard into the lentils. Simmer until the chard is tender and the pasta is al dente, about 7 minutes (or a bit longer, depending on the pasta you pick. Go by the package). Discard the celery and bay leaf, and serve.

This has been a pretty strange weather year so far. This spring and early summer, we had so much rain that the Arkansas River was at flood stage for weeks. The River Trail still had portions under water well into summer. Then, all of a sudden, it stopped raining and got hot. We didn't have as many days over 100 as we did in 2012, but it was hot and dry for a long time. Enough so that we entered a flash drought. Did you know that was even a thing? I didn't.
Malcolm and I did our best to keep things watered, but there are some areas of the backyard that are hard to reach properly, and as a result, there were some casualties. The most vexing to me is the jasmine I had planted alongside the fence. When I planted it, I had visions of it growing and overtaking the entire stretch of fence, as I remember seeing jasmine do once in Laguna Beach California. Turns out jasmine is not a fan of drought and low humidity, and despite (semi) regular watering, it dried out as crispy as an overcooked potato chip. I plan to cut it back to the ground and hope that maybe it comes back in the spring, but if I am honest, I am pretty sure it is toast.
The other primary casualties were three rose bushes; one miniature one that was here when we moved in, and two that I planted. They all have had problems with dropping leaves and rust and so forth, so it wasn't a huge surprise when they succumbed. That bed is also impossible to grow anything in, apart from a crepe myrtle, one or two day lilies, and a scraggly hosta. I tried to get lemon balm to grow there, since it seems to like trying to take over my vegetable garden, and it died. Same with the other various supposedly hardy plants I have tried. Now I am thinking of turning that area into a little pebble garden. I could make zen designs in the gravel.
Surprisingly, the kale I planted way back in the spring is still going strong. It slowed down a bit over the summer, but it is still growing plenty of leaves and has mostly taken over half of one of the raised beds. The other bonus in the garden is the volunteer Thai basil. While we bought a set of Thai basil this year, I planted them in pots on the deck, where they grew but didn't thrive. But as the garden started growing this spring, I noticed several plants of what appeared to be basil, growing among the tomatoes and peas, and I let them go. I figure they must have come from the compost in our bins, after I threw the spent flowers in there last year.
That is gardening for you - heartbreak and lovely surprises.
Posted by Hope at 11/02/2015 08:45:00 PM No comments: