I'm back, and I bring soup

Yup, it has been a while since I last blogged anything. Life has gotten in the way, and to be honest, Facebook has made me tired and wary of so much sharing of personal details. But I miss blogging, and this soup has inspired me - it is a soup that everyone in the house loves, and something that good has to be shared.
My dad always brings recipes when he comes to visit; we look forward to not having to cook while he is here, and he looks forward to sharing favorites with a new audience. During his visit in March, he made this one for us, and it was a big hit. It is a broccoli, bean, and pasta soup from an Italian cookbook that he bought in Florence, Italy called Cucina Rustica by Viana La Place and Evan Kleiman (it looks like it is/was available here in the United States as well, if you are inspired to find it yourself). On first glance, it doesn't appear to be magical - just broccoli, beans, and pasta - but there is just something about the way the ingredients come together. Malcolm is not a picky eater by any means, especially compared to other toddlers, but he tends not to eat soup in its fully assembled state; he will eat beans, and vegetables, and pasta, and meat - just not all in one spoonful. This soup? He slurps up and asks for seconds. So do I, and I don't mind that the recipe yields so much soup that I end up eating it for days afterwards. 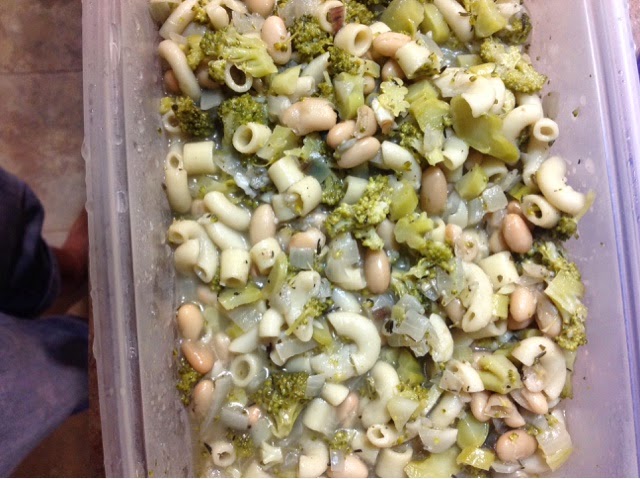 I didn't remember to get a picture while it was fresh, so this is a little less soup-like than it is when first cooked, but I think you could add more broth when you reheat it, if that bothers you. I like just as it is.
Without further ado, here it is:
Minestra della Fattoria (Broccoli, Bean and Pasta Soup) from Cucina Rustica by Viana La Place and Evan Kleiman. Serves 6-8. Takes about an hour.
1 red onion, peeled and chopped
4 tablespoons extra-virgin olive oil (I confess to using canola some times)
6 garlic cloves, peeled and minced
1 sprig fresh oregano (I used 1 teaspoon dried)
2 springs fresh thyme (I used 1 teaspoon dried)
1 bunch broccoli, chopped very fine (I use one of the bundled bunches from the grocery store that have three crowns, and use some of the stems too if they look OK)
2 15-ounce cans cannellini beans, undrained, or three cups cooked dried white beans with their cooking liquid
6 cups chicken stock
4 ounces dried pasta, such as elbows, broken spaghetti, or tiny shells (this time I used a mix of elbow macaroni and ditalini)
Salt and freshly ground pepper to taste (I used about 1 teaspoon of salt this time - the amount may vary, depending on how salty the beans and broth are)
Parmesan cheese for grating at the table
Saute the onion in the olive oil in a soup pot until it is soft. Add the garlic and saute until it turns opaque and releases its aroma, about 2 to 3 minutes. Add the herbs and the broccoli, and cook over moderate heat until the broccoli is quite soft. Add the beans with all their liquid and the chicken stock. Cook at least 15 minutes, or until the soup thickens. Add the pasta and cook it in the soup until al dente. Add salt and pepper to taste. Serve immediately and pass Parmesan cheese to grate into the soup.
Posted by Hope at 10/27/2014 03:46:00 PM No comments: