Here are some pictures from our busy Thanksgiving weekend. On Thanksgiving we headed to a friend's house for authentic homemade Louisiana gumbo and other deliciousness. No, no turkey this year. I think in the 11 years we've been married, Benjamin and I have had turkey 4 times for Thanksgiving, and two of those were when my parents came to visit and my mother did the cooking. Usually, if it is just going to be us, we make enchiladas.  This year, I was happy to not have to do any of the cooking, since I would have had to do it around Malcolm. I did bake a pumpkin pie, using store-bought pumpkin for the first time in probably 13 years, and it was a complete failure. The pumpkin puree tasted like the container it came in - musty cardboard - and was pretty much inedible. Major bummer! And it was a reputable organic brand too. I guess that will teach me not to cut so many corners again! Anyway, on Saturday we roasted a chicken and I made an apple pie to make up for the lack of pie leftovers.

Since it is fall here in Arkansas, we took some time to rake leaves. We got 10 or 12 giant bags, and didn't even finish the backyard, not to mention the front. There are still plenty for my dad to rake in a few weeks when my parents arrive for Christmas. 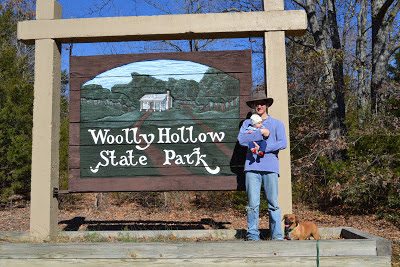 And we took Malcolm on his first of what we hope will be many post-Thanksgiving hikes. We figured he wouldn't have the stamina (or patience) for a long hike, so we chose Woolly Hollow State Park. The hike there is only about 3 miles, and the drive is about an hour from Maumelle. We've done it before and have enjoyed it. This time, the weather was almost perfect, just a little windy and cold up on the exposed ridge side. 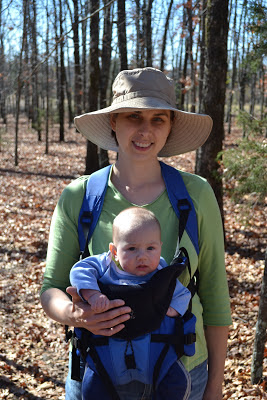 If you look closely at this picture, you will see the death grip Malcolm had on my finger. He sucked on that finger for much of the hike, so much so that I had drool running down my palm and dripping as I hiked. Ah, babies! 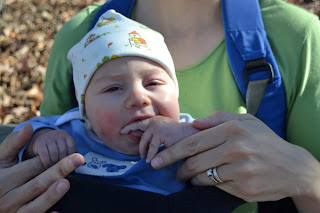 I did convince him to suck his own fingers at some point. 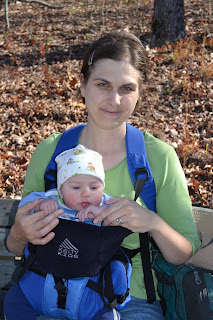 In the end, we didn't make it the entire 3 miles - he was getting too hungry and tired - but he did pretty darn well. He definitely enjoyed facing forward in his new carrier that I got from our neighbors - so much easier to see out that way.  I just bought a backpack style carrier that we will be using once he is able to sit up on his own. Then he will be able to play with our hair while we hike!
Posted by Hope at 11/27/2012 08:26:00 PM No comments:

The weather has taken a cold turn - actually a bit colder than normal for this time of year, not that I am complaining - and the leaves are falling. Oh, the leaves. Oak trees hold a lot of leaves, and as you may recall from previous years' complaints, we have a lot of oak trees around our house. When my dad visited in October, he cleaned up all the leaves currently on the ground (some of which we had raked into piles in July, since they fell early due to drought), and a day or two later, the lawn was covered again. This past weekend I got out the mower and rake and cleaned up the front lawn. Thanks to the incoming cold front and the wind driving it, by mid-afternoon the lawn looked untouched. The only way you could tell I had done anything was that the grass under the leaves (what there is of it) was now tidy. The back yard is a solid carpet of leaves, and is likely to stay that way for a while, since neither of us has much time to do anything about it. Well, I have time during the day, since I am here all the time, but I can't exactly mow with Malcolm strapped to my chest, and raking with him puts a lot of strain on my back.

I have been reading a bit more lately. I found a new series at the library - the Samuel Johnson and Boswell series by John Connolly, about a boy and his dog who find themselves going up against demons from Hell who want to take over the world using a portal created by the Large Hadron Collider (it's funny, really!). I accidentally read the second book, The Infernals, first, which is something I usually would never do, but since I had already started it and didn't seem to be missing that much I kept on. Now Benjamin and I are reading the first book, The Gates, together and enjoying it. There are only two so far, but I wouldn't be surprised if it continues eventually.

Last night the UPS man delivered not one but two new books I have been waiting for - Soulless: the Manga Volume 2 by Gail Carriger, a manga version of her Parasol Protectorate series; and The Inexplicables by Cherie Priest, the newest book in her Clockwork Century series. I read the manga last night in one go, after Malcolm was in bed, and I will be starting the other today.

And, since this blog seems to be turning into an all-Malcolm blog, here is a recent picture: