I was just looking back at January of this year to see if I resolved anything or not. I didn't, sort of. Instead, I said I wanted to get into better shape, go to the gym several times a week, and go hiking more often. And I did. I am definitely in better shape than I was in January, and I have been going to the gym at least 3, often 4 or even 5 times a week, most weeks. Hiking took a hit simply because it was way too hot for much of the summer to even go for a walk around the neighborhood, let alone tromping through the woods.

So now I have to think of non-resolutions for this year. One blog I read, by a dog behaviorist suggested making a commitment, instead of a resolution, to working on something specific with your dog. Sounds like a good plan to me. Off the top of my head, my goal is to help Miikka be a more polite dog, especially when guests come over. He loves people so much that he just has to jump all over them, get attention from them, and behaves like a brat. And he still doesn't understand the point of stay, if treats are not being handed out at 2 second intervals. Sigh. I guess the canine good citizen class is in our future (after our next round of tennis classes and the baby tennis league we will be in - it meets at the same time...)

Hey, it is the end of the year, time for making lists. Since I don't have any pictures to share yet (they are off the camera, but not off the external hard drive...), I am going to give you some book recommendations.  These are ten of the books I really enjoyed this year, in no particular order. They may or may not have been published in 2010, some are fiction, some are not.
I haven't included everything that I liked, so if you want to see what else I have been reading in 2010, I encourage you to get an account on Goodreads. Then you can look at all my various lists, and create some of your own.
Posted by Hope at 12/28/2010 10:49:00 AM 1 comment:

A couple of movie recommendations

Tis the season for watching movies.  We rarely go to see movies in the theater, and although we have a Netflix subscription, we don't watch all that many movies at home either.  This is mostly because of me, and my general dislike of the movie form, I will admit. But during the holidays, I somehow become far more open to movies, at home and in the theater. So, over Thanksgiving we went to see Harry Potter and the Deathly Hallows Part 1, and over this past long holiday weekend, we saw two movies that I want to recommend.

The first was a DVD we got from Netflix - Stranger Than Fiction.  A man begins to hear a voice in his head, narrating his every move, and it says he is going to die soon. At the same time, in the same city, an author is trying to get over her writer's block and figure out how to kill her character (the death of the main character being her trademark stylist flourish). It stars Will Ferrell, who I usually cannot stand but here quite liked, Emma Thompson, Queen Latifah, Maggie Gyllenhaal, and Dustin Hoffman, as a hilarious over-worked literature professor (he is head faculty life guard - ha!). I don't know why this movie didn't make more noise when it came out in 2006 - it did get nominated for Golden Globes, but otherwise, poof. Anyway, rent it, you will probably enjoy it greatly.

The second movie we saw this weekend was True Grit, the new re-make by the Coen brothers. Again, I don't really like the Coen brothers (or at least, I think I don't. I have enjoyed several of their movies, but didn't like Fargo, which is probably where that idea comes from) but this movie was really, really good. The music was just the right kind of Western music, the actress playing the main character was wonderful, and Jeff Bridges and Matt Damon were also really good. Now I have to go read the novel - written by an Arkansan, and set partially in Arkansas!
Posted by Hope at 12/27/2010 11:59:00 AM No comments:

Email ThisBlogThis!Share to TwitterShare to FacebookShare to Pinterest
Labels: movies

Home-made toffee, gingerbread, carmel corn, and a trip to the gym

Today at work I have received from various Santas packages bearing home-made toffee and gingerbread cookies, and have shared in a box of Godiva chocolates (I only had one though!). This weekend, in preparation for my parents arrival, I will be making sugar cookies and carmel corn.

Thank goodness I managed to drag myself out of bed this morning (eventually anyway - cuddling came first) and that we have tennis tomorrow. At the gym, I have grown tired of the elliptical trainer, so I have been forcing myself to run on the treadmill - actually run - some days. If I do the interval workout, where I get to alternate the running with walking, I can go for the full 30 minutes. I am not sure I like running, but it does feel good when I stop, and as I tell Benjamin (who has to be all scientific and wet-blankety and say that is impossible) I can feel the fat just jiggling off my hips! Well, the fat may not actually be jiggling off, but running certainly makes my muscles work differently than the elliptical. Anyway, I might become a runner for reals one of these days. Maybe.
Posted by Hope at 12/17/2010 12:55:00 PM No comments: 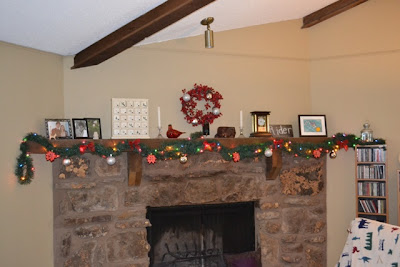 I haven't put up our tree yet this year, but I did decorate our mantle. As you can see, we have a lovely rustic mantle over our fireplace, perfect for a garland, and possibly stockings. I have had that wreath for 8 or 9 years - Mom sent it to me one year in Austin. It is a little the worse for wear when you get up close to it, but hung with a few shiny balls it looks just right.  My wooden Advent calendar is to the left of the wreath. I had to fill it on my own this year, so it is just Hershey's kisses and Reese's peanut butter bells, but hey, chocolate is chocolate. Mostly I just like opening the little doors and marking the time until Christmas. That is all the decorating I will be doing (unless I get the tree out - but that is an iffy prospect, given Miikka's talent for destruction and Oliver's penchant for eating anything gree, even a fake tree). 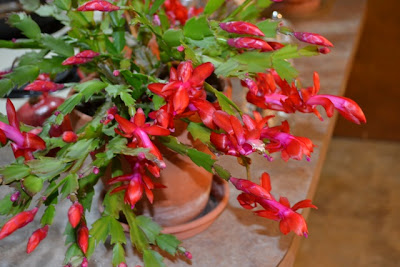 The mantle is not the only color for Christmas, however. My two Christmas cacti are blooming right now as well. I think this is the first time I have ever gotten them to rebloom. The trick is to keep them on a natural lighting schedule until the blooms are set. In my case, I left them out on the deck until it started to get too cold. I have wanted to do that in the past, but either it was too cold, or I just forgot or something. My mother has a Christmas cactus (or Easter - some years it blooms then instead) that is probably almost as old as I am, and it blooms every year. Maybe this one will survive that long!
Posted by Hope at 12/14/2010 12:46:00 PM 1 comment:

But wowee - other parts of the country sure have a lot! When cities like Seattle, Austin, and Little Rock get all atwitter about snow and the news stations go into natural disaster mode, I tend to roll my eyes. I feel justified in this, now that I have lived in places without snow and places (well, a place) with lots of snow.  But when Minneapolis has a snow storm that has been dubbed "Snow-My-God," you know there is some serious snow. If you haven't seen it anywhere yet, check out the video of the Metrodome collapsing.

We don't have any snow, but it is certainly cold enough. I don't think it has gotten above freezing today. It is sunny and dry though, so we are all at work. Darn. I would take a day off, even if it meant I had to listen to the panic of news casters.
Posted by Hope at 12/13/2010 03:26:00 PM No comments: 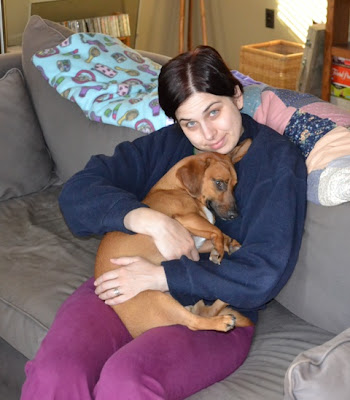 Email ThisBlogThis!Share to TwitterShare to FacebookShare to Pinterest
Labels: outfit

The Problem with Reading...

Is that I often have to stop doing it to go on with normal life. Today, for example, I have been stuck near the end of two separate books all day, but I am also stuck at work, so I can't really finish them with the single-minded determination I would if I were home. And one of those two is on my iPod, the battery of which died right after I got to work, so I can't even listen to the book on my way home.  Once I get home, I will have to play with Miikka and make dinner with Benjamin, and do domestic things. I might be able to finish the book before I go to bed, but since I have to get up at 5 tomorrow to go to the gym, I can't stay up too late. Why won't the world just let me read?!

Email ThisBlogThis!Share to TwitterShare to FacebookShare to Pinterest
Labels: reading 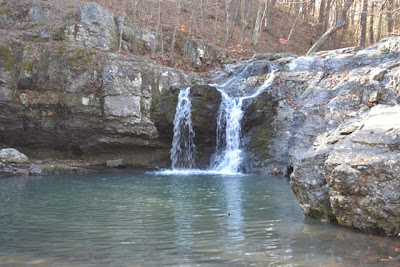 This is the only picture that survived my photo accident last weekend. We went to Lake Catherine State Park for our annual post-Thanksgiving hike. The main trail we planned to hike was closed for no apparent reason (at least not apparent to us) but we managed to put together a decent hike from the other two loops.  It had rained all day Thanksgiving, so there was actually a good amount of water in the little creeks and the waterfall. It would probably be a good place to go swimming in the summer.
Posted by Hope at 12/06/2010 12:34:00 PM No comments: 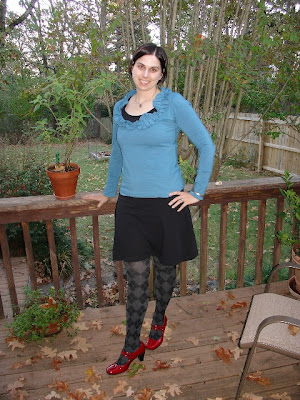 It appears that I have turned Friday blog posts into outfit posts, so here is one for this week. This picture is from the beginning of the month, before the crepe myrtle turned red and then lost all its leaves and before the grass turned bland brown.  But I did wear a variation of this on Wednesday, substituting my boots and black leggings for the red shoes and argyle tights. Oh, and my hair is more red now. I like this particular combination better I think, but either way, it is pretty cute.
Posted by Hope at 12/03/2010 11:06:00 AM No comments:


Thankfully, my pictures from Thanksgiving were not among the pictures lost in the, er, accident.  We had a lovely meal - roast chicken with roasted root vegetables, stuffing muffins, Quaker bonnet biscuits (which somehow puffed up to almost life-like proportions), roasted broccoli with walnuts, pumpkin pie, and an apple crostata.  Yum yum. 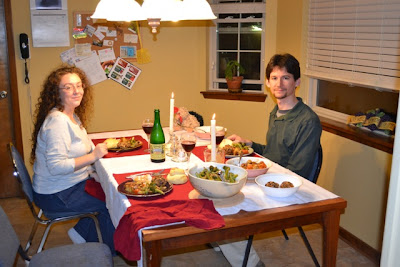 Crystal was unable to go home for Thanksgiving, but we were very happy to add her to our table (not to mention her pie and broccoli). 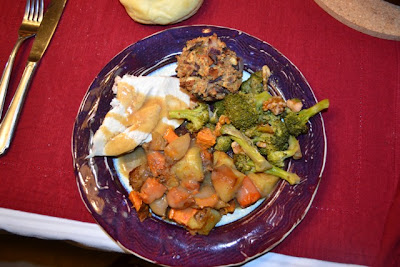