Tuna casserole is one of those dinners I tend to put on our menu when I have completely run out of inspiration or I am trying to be frugal, or both. I suspect the recipe I have came from the back of a can of mushroom soup. It is just so very bland and boring and what I think of when I think of 1950s recipes (the ones you see in old magazines, with lots of Jello "salads"). Since it <i>is</i> handy to have an inexpensive, mostly healthy casserole recipe in one's back pocket, I have started to tinker with my tuna casserole, and the last two times I done so, everyone has gone back for seconds. Tonight, I got raves (from everyone except Malcolm, but he really just wanted a candy cane anyway). After I mentioned this fact on Facebook, several people said they'd like a recipe, so here it is, annotated. I hope it works as well for you as it does for me.
Hope's Tuna Casserole
Preparation: 20  minutes
Cooking time: 20-30 minutes
1 pound pasta - bowties or some other shapes work well. They are sturdier and hold the sauce better than the traditional egg noodles.
1-2 Tbsp oil, divided
1/2-3/4 cup diced onion
2 sticks celery, diced
1 cup or so chopped mushrooms - I prefer baby bellas, but whatever sort you like/can find at the store would be fine.
2 cans tuna - I keep it simple and use chunk light tuna in water
1 can cream of chicken or cream of celery soup (this is the biggest change - cream of mushroom is just so...gray)
1/2 cup milk - I used whole milk this time, but whatever you normally use would be fine.
1 1/2 cups frozen green peas or frozen peas and carrots
salt and pepper
1 cup grated cheese - I used sharp cheddar this time, but I have also used pepper jack with success
1) Preheat oven to 375.
2) Cook pasta according to the instructions on the bag/box. Drain and put back into pot or in a large mixing bowl.
3) Sauté the onion and celery in half of the oil until soft, but not brown. When finished, add to the noodles.
4) Heat the second half of the oil and sauté the mushrooms until they are soft and have released some of their juices. Add to the noodles and onion/celery mix.
5) Drain the tuna and add to the pot. Also add the soup, the milk, and the peas. Stir everything together and season with the salt and pepper to taste.
6) Pour the noodle mixture into a two quart casserole dish. Top with the grated cheese.
7) Bake for 20-30 minutes until bubbling and the cheese is melted. If you like the cheese a little browner, turn on the broiler for the last couple of minutes.
Posted by Hope at 12/16/2014 09:29:00 PM No comments: 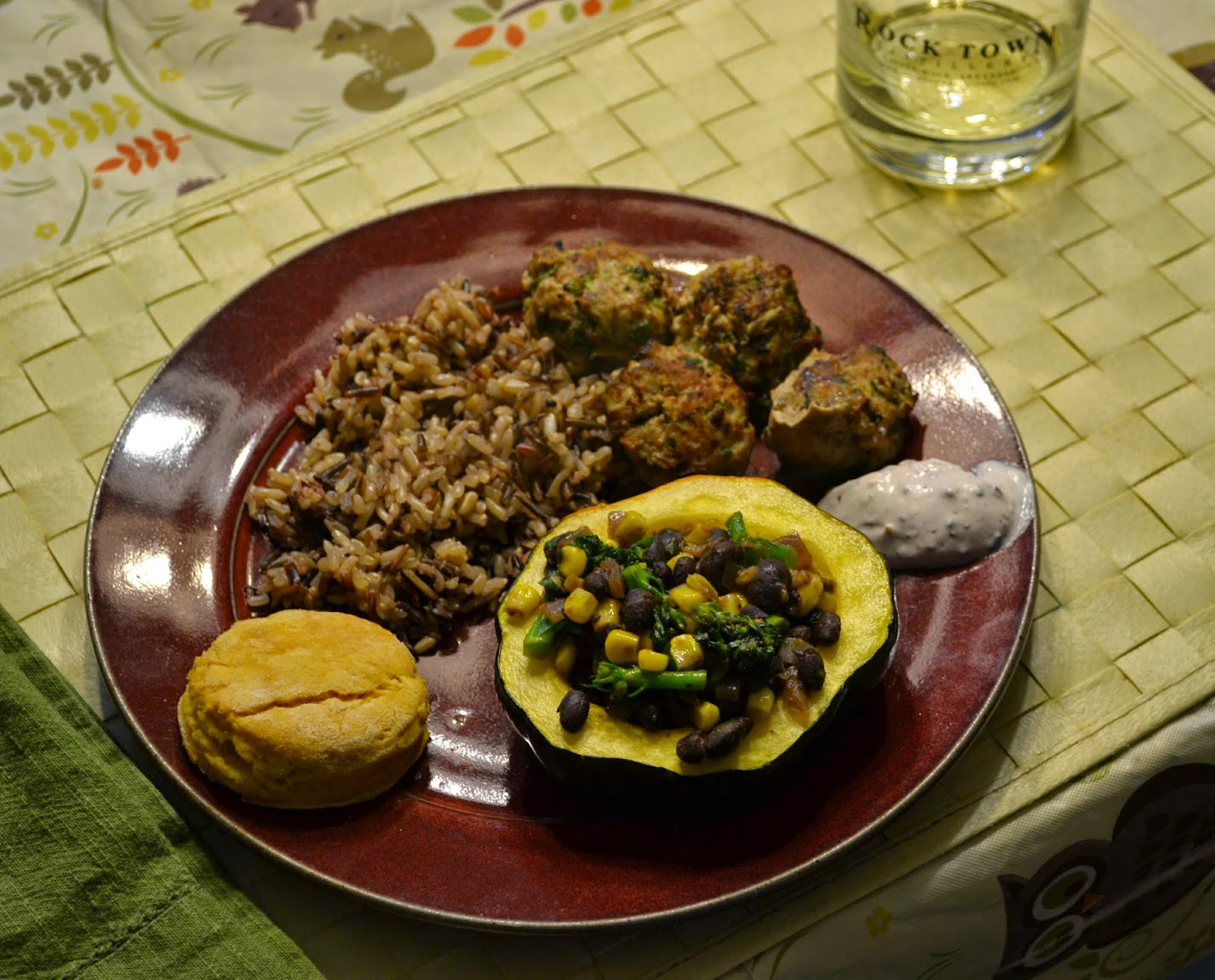 Since this is apparently now primarily a food blog, here is the Thanksgiving dinner we had this year. As you can see, it isn't the traditional turkey, stuffing and mashed potatoes. Some years we go to all that trouble, but more often we prefer to make something different. It is more fun, usually less work, and perhaps even a little bit healthy. This year, we had turkey-zucchini meatballs and sumac sauce from the Jerusalem cookbook. (Here is a slightly modified version from Simply Recipes, if you don't want to seek out the book. But you should at least get it from the library, since it is a beautiful book, as well as full of good recipes). The recipe calls them burgers, but I call them meatballs.  Either way, they are delicious, and the sauce is good enough to justify seeking out sumac. (You can order it from Penzey's, here.)

To accompany the turkey, I made acorn squash stuffed with black beans, corn, and broccoli from a recipe I found at the New York Times website. It was intended as a vegan main course, and I think it would definitely be good for that, but it was also a perfect side. It is very American too, with the squash, corn and beans. I left out the optional rice, since we made our own wild/brown rice as well. To round out the plate we had sweet potato biscuits brought by a friend.

I neglected to get a picture of the pumpkin cheesecake that we had for dessert. Too busy eating it. It also turned out really well. I used ginger snaps in place of the graham crackers in the crust, and they added just enough snap and flavor.

In short, we had a lovely meal, and I heartily recommend giving alternative menus a try for the holidays.