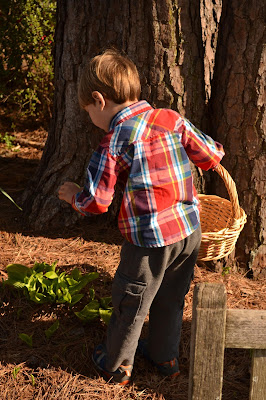 This past weekend we crammed a lot of activity into one Saturday. Malcolm got to go on an egg hunt at our church. He had been anticipating it for weeks, and it did not disappoint. 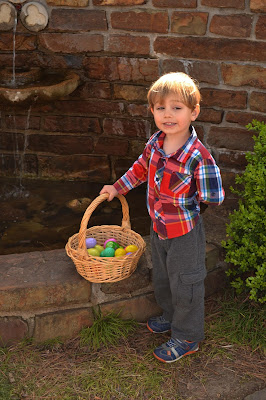 There were dozens and dozens of candy-filled plastic eggs scattered around, just waiting for some hot little hands to grab them up. Malcolm got his fair share, and then some. He will probably still be eating them in May. He also got to meet the Easter Bunny. That hug is a big improvement over this time last year, when he saw a person in a kangaroo outfit somewhere, and edged away with a panic-stricken whimper. 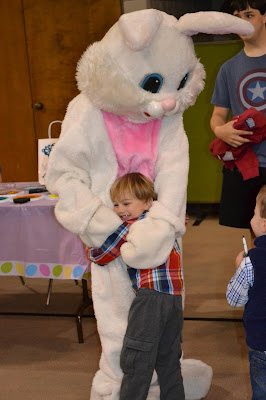 In addition to being Easter weekend, it was also the last of spring break. Since I was out of town the first weekend, and Benjamin had been busy all week trying to catch up/get ahead with work, we hadn't had much chance to do something really fun. Saturday was a glorious spring day, with blue skies, warm sun (but not too hot, yet), and gentle breezes. We had to head outside.

So naturally, we decided to climb Pinnacle Mountain. It is a large and steep hill just outside of Little Rock, on the edge of the river. Now, I know some of you are from places with real mountains, and would scoff at calling this hill a mountain, but hey, this is Arkansas. We don't have volcanoes or young mountains - ours are all old and short. Pinnacle is one of those places that attracts both serious hikers (one time we were there, an older man in spandex was climbing it, repeatedly - he passed us three times while we were there) and casual "Hey it's nice out, lets do something outside" hikers, the ones who show up in flip flops with one tiny bottle of water between them. And since Saturday was such a nice day, it seemed like all of Little Rock was there to enjoy it. 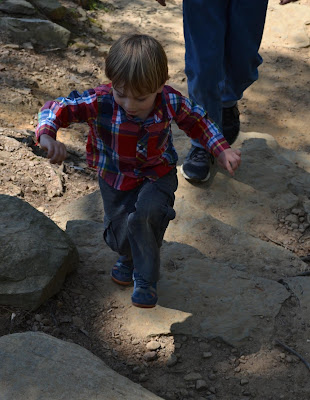 Lately, Malcolm has been asking to go hiking, which has meant tromping through the woody areas of our hill - he and Benjamin found a deer antler on one such adventure walk. He is really getting into it, which is great, since we love hiking too. We figured that his enthusiasm meant he might be big enough to tackle a real hike. And he was.

He hiked the entire way to the top of the mountain, almost a mile of just climbing, only stopping a couple of times for water. In fact, he did better than a number of the adults we passed, never complaining about the rocks or the climb at all. 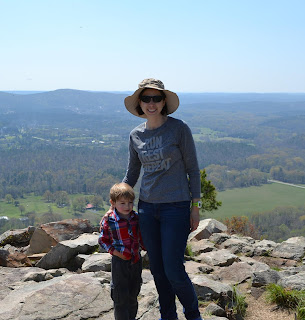 He did get a ride most of the way down the hill, passed between Benjamin and myself, but by that point, he'd earned it. And I know there were some other hikers who probably wished for a ride down!

So, as I may have mentioned a few (hundred) times, I have been training for a half-marathon since November. Yesterday, I finally ran that marathon, and not only did I survive it, I crushed my personal goals. I finished with a time of 2:08:53 - when I first started training, I was hoping just to break 2:30. As it became clear over the weeks that I would be able to make that time fairly easily, I began to wonder if 2:20 was realistic. Then, a few weeks ago, I ran around 2:15 on my one race-length long run, and repeating that time during the actual event became my goal. Well, I made that for sure!
I used the "Finish It" plan from the Another Mother Runner book, Train Like a Mother, and I give a lot of credit to that excellent training plan for preparing me so well. Yes, I had to do the work, and trust me, I did! But it really helped to have such an organized and easy-to-follow plan.  I only missed or skipped a few workouts (although I do admit to using tennis as both a "fun workout" and as cross-training. What? It works!) In hindsight, more strength work might have been a good idea, but that is why you race again, right? To fix stuff and get better!

Anyway, the race itself. I woke up a number of times, exactly one hour apart, during the middle of the night, in anticipation. I wasn't worried that I would sleep through my alarm - I am far too light a sleeper for that to ever happen - but I was keyed up. The final time I woke up was around 3:50 - a full hour before my alarm. I lay in bed for a while, trying to will myself to get just a little more sleep, but gave up around 4:30. In the end, that was fine - it gave me time to do a few sun salutations to stretch out, make and eat a peanut butter and jelly sandwich, drink a cup of tea, use the bathroom, get dressed, and out the door by 5:20. I wanted to leave that early because I was worried about parking and getting to my proper corral on time. I really didn't need to worry. I found a good parking spot almost immediately and decided to walk over to the convention center to stay warm and find a bathroom until it was time to head to the starting area.

This is when I started to wish that I had a running buddy. There were so many people there, and most of them were in pairs or groups, chatting and planning and finding ways to stave off nerves. I did see people I knew, and I said hi, but I didn't come with anyone, and wouldn't be running with anyone. I didn't even have my iPod, since the race instructions discouraged using them. I almost always run by myself, and I often turn off the iPod part way through a long run, so it wasn't as if this was a new experience, but a race is a different sort of event than a solo training run. It would have been nice to have someone there to share it with, this big new experience. As Winnie the Pooh says, "It's so much friendlier with two."

Eventually, everyone else at the convention center with the same ideas as me started heading for the doors, so I did too. We were divided up into starting corrals, to make it easier to actually start running, once we hit the starting line. I intended to try to stay with the pacers who were leading the 4:25/2:12 group, but that idea fell by the wayside as they got started at a faster pace than I was wanting to go right then. So I stuck with the pacer on my watch, trying to keep from going out too fast. Mostly, that was my whole strategy - stick with the pace I had on my last training run for the first half or 2/3s of the race, then try to pick up my pace near the end.

And that is what I did. I am not going to bore anyone with my mile splits (although I will, if you ask), but basically, I kept a steady pace for the first half, and then started going just a little faster every mile after that. I was almost sprinting by the end. I was also incredibly happy that, when we reached the point around mile 12 where the marathon course split off from the half marathon course, I was not going to have to run another 13 miles!

The weather this year was just about perfect - not too cold, not too hot, not windy, not rainy. I could have used sunglasses, but compared to past years when it has been sleeting or thundering, that is a pretty good complaint to have.

Overall, a good race. There were lots of aid stations with water and Gatorade (and porta-potties). There were also quite a few informal aid stations handing out beer in tiny cups, and some with donuts or candy. I snagged a peppermint from a police officer somewhere around mile 7 or 8, but avoided the beer and donuts (the former with no pangs - even if I did like beer, 7 AM is too early for me - and the latter with a bit of regret, although I knew my stomach thanked me). Around mile 12 there was a gauntlet of people handing out beads and lipstick - in case you wanted to get fancied up before hitting the finish line. This, I didn't like. I was trying to pick up speed at this point, and I kept having to dodge people who really wanted me to have beads, not to mention the discarded tubes of lipstick.

Now that I am done, I am already plotting out my next race. There are several 5K and 10K races that I have run in the past coming up, but I kind of want to do another half. Not really soon, but maybe in the fall. I want to see if I can get faster!

And I want another medal! 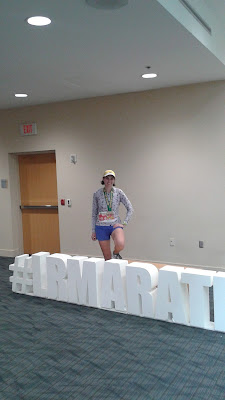