I checked on the backyard time lapse camera over the weekend, and it appears to be working just fine! I had 12 days worth of photos of our garden, and the changes were already visible in that short amount of time. Since it was working, I decided to leave the pictures on the memory card for now, and take everything off once I have a month's worth. So, sorry if you were waiting eagerly - just another couple of weeks, I promise! And by then, I will have found the software I need to put the photos together into a video (there was supposedly a CD in the box, but it may have been left behind at Christmas, and then disappeared. Oops.).

In garden news, over the weekend we planted our broccoli (plants) and collard greens (seeds), and 8 tomato plants. We still have beans to plant, and I ordered 3 peppers (Anaheim, jalapeno and serrano) as well as a heirloom cherry tomato plant from our CSA. Let's hope this summer is kinder on the garden than last year!
Posted by Hope at 3/27/2012 02:14:00 PM No comments:

Email ThisBlogThis!Share to TwitterShare to FacebookShare to Pinterest
Labels: garden 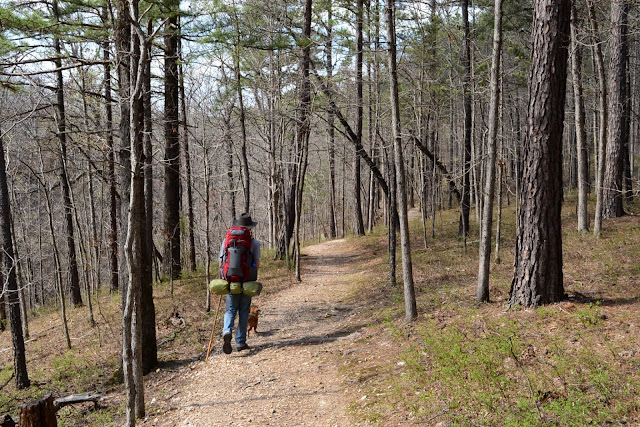 After all the complaining about the problems with our hiking trip this past weekend, it is only fair that I show you the good stuff. The weather was pretty good - a little warmer and more humid than is ideal (for me anyway), but not truly unpleasant. Most of the trees have not yet regained their leaves, so we had good views of the hills, and eventually the lake. 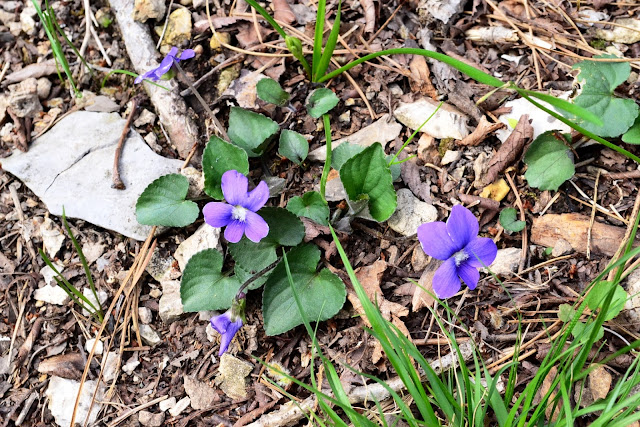 The wildflowers were delightful - violets, and little white flowers that sort of looked like a type of allium (picture of those didn't come out), and these little rock rose-types. 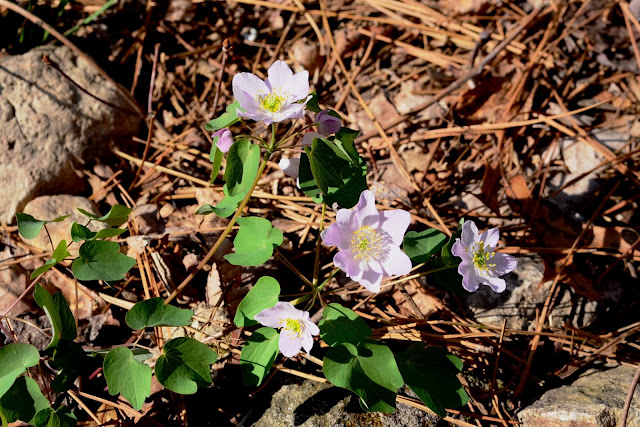 I'm still experimenting with the various settings on my DSLR, and trying to take pictures while holding a dog leash is not idea (yes, I did have Benjamin hold it some of the time, but not always), so the pictures didn't come out as well as I had hoped. I ended up having to adjust the balance and colors on the computer, which I would prefer not to do - I want my picture to be untouched-up. Not that it is a crime to "fix" a picture - the primary reason Ansel Adams' pictures are so very good is his darkroom technique - but I don't really like doing it because of operator error. Oh well, gives me a good reason to go hiking again next spring. 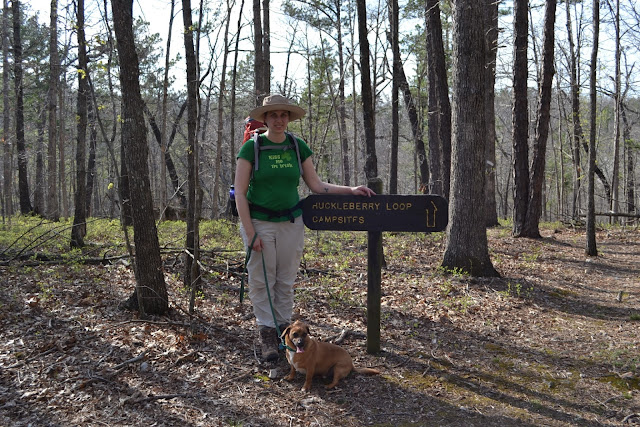 Here are a couple of pictures for those of you who want to have pictures of my pregnant belly. Since I refuse to post posed belly pictures until I am truly "great with child" (and am even more adamant about never referring to it as a bump) they are all you are going to get for a while. Not a whole lot to see yet. 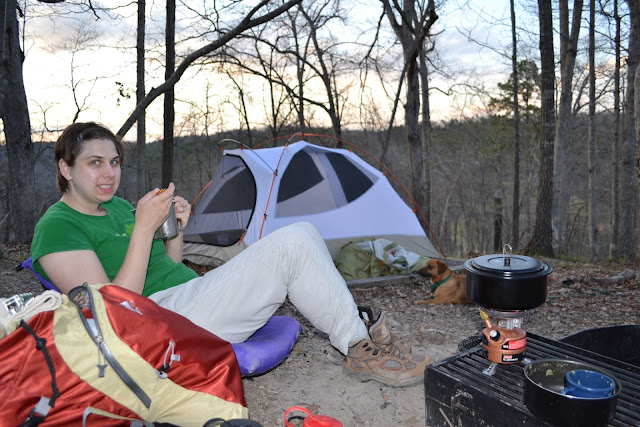 Hmm. This one is sort of awkward - where is my other leg? And pictures of people eating, not generally graceful. Oh well. You can see our cooking set-up on the grill of the brand-new fire pit (and a very nice fire pit it was), and the too-short tent pad in the background. 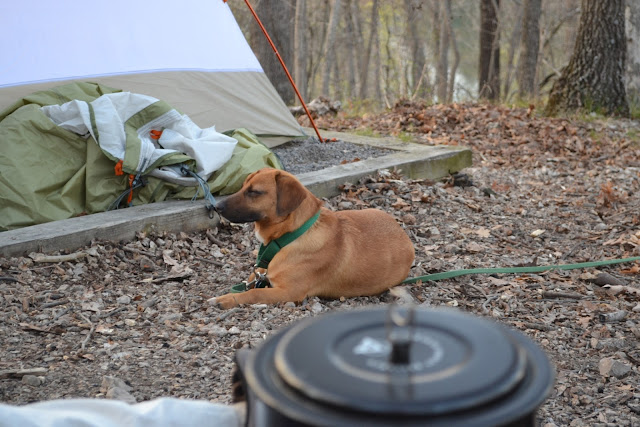 Miikka in a quiet, and relatively undirty moment. Because the boy scouts had taken out the old, rusted fire pits (we saw them farther down the trail, waiting to be taken out by boat), they had also scattered all the old ashes around the area. Miikka had a good time hunting for food scraps and lolling in the ashes; since we also slept with him, the tent got rather gritty as well. The first thing I did when we got home was give him a bath. 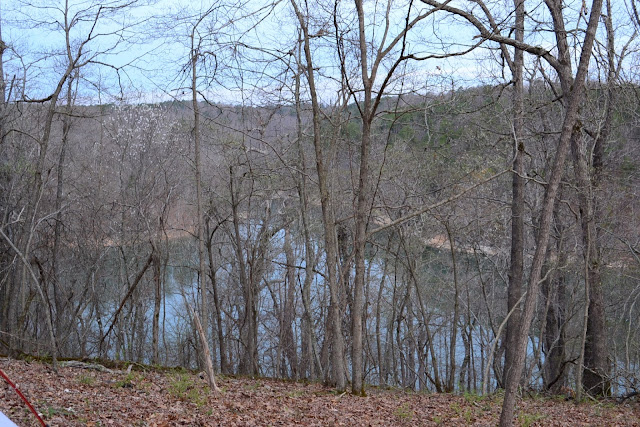 And our morning view of our corner of a very large, winding lake. If the trees had been in full leaf, we would hardly have been able to see any glimmer of water. I didn't take any pictures on the hike out, since I packed the camera in my backpack. The wildflowers were still very pretty though.
Posted by Hope at 3/22/2012 11:55:00 AM 1 comment:

Well, that was less than a full success

This weekend was the start of spring break at the university where Benjamin teaches, so we decided to take advantage of his relative freedom and go backpacking. We also wanted to get in at least one overnight trip to the woods this year before I get too big to enjoy sleeping on the ground and tromping through the woods with a large pack on my back. Since it was sort of a last minute trip, and because I had been wanting to give it a try, we took Miikka with us. Now, he is a very good hiker, especially for a dog with such short legs, but, and this is now a huge but, he is a terrible camper.

For starters, the day was quite warm - not for Arkansas in general, compared to the actual heat of summer, but for March, 80 with lots of humidity is still a bit much - and he doesn't really like the heat. I guess that is understandable, what with his fur coat and short legs that put him close to the ground, but it is sort of a pain when it comes to going for walks or the occasional hike. And the path was primarily composed of chunks of crushed granite or other rocks, so I am sure it was not comfortable for his paws. All understandable reasons why he wasn't at his best on the 4 miles in to the campsite. I wasn't at my best either. So, while the hike wasn't his finest hour, the problem that disqualifies him from all future camping trips was yet to reveal itself.

No, that came after dark, once we were all in the tent, preparing to get some much-needed sleep. When he started growling and wuffing at every crackle in the bushes, and every owl hoot. For hours. We would just manage to drift off, and he would hear something else and wuff. It wasn't full-fledged barking, except once (when I went out to find a tree and left him behind), but at close range, in a tent, while trying to sleep on hard ground... As Benjamin put it, the thing about sleeping on the ground is that you have to fall asleep fast enough that you don't really notice how uncomfortable you are. With Miikka grring and wuffing, that was impossible. Also, I am not supposed to sleep on my back, so I had to keep alternating from side to side to keep my arms and hips from falling asleep or getting too sore, but my sleeping bag is a mummy sack that doesn't do well with lots of wiggling - it gets all twisted. It didn't help that I was also trying to cuddle Miikka into submission, so he was on my bag or my arm for quite a while. In hindsight, I should have realized that his tendency to bark at random noises in the dark of our backyard would carry over to the woods. But in my defense, I honestly thought that he would settle down once we got into our sleeping bags and petted him for a bit. I thought he would enjoy being allowed to sleep with us, something he never does at home. I was wrong.

We eventually got a few hours uninterrupted sleep, but it took a long time to get there, and it didn't last nearly long enough.

So, Taking Miikka Camping can go down in the annals as one of those supposedly fun things I will never do again.

My lilac bush has just started blooming! I was worried it wouldn't do well this year, because we never got really cold this winter (and have now jumped straight to early summer), and lilacs like the cold. But, it is now blooming.

That is all. Return to your lives.

Oh, I hope to have a time lapse video of our garden soon. I now have a plant camera in my possession - it can be set to take pictures at a variety of intervals, for as long as you want (and the batteries and memory card last). Until this week I didn't have the memory card it needs to work, but now it is set up for a test run, attached to a bird feeder pole in the back yard and pointed at the vegetable garden. If you have been reading me for a while, you might remember that I did a picture of day thing for a little while when we lived in Brockport. Well, then I had to remember to take the darn picture. This way, I just have to set the timer, and let it go. I will check it this weekend, and if the results look good, I will set the camera back up and let it run for a while, taking a picture a day. This is a great time of year for it, with the garden just getting started an all.
Posted by Hope at 3/14/2012 03:52:00 PM 1 comment: 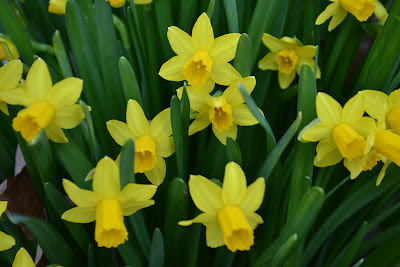 These are actually from a couple of weeks ago. Our spring is far enough along now that all the trees are blooming, and the daffodils around us have definitely passed their peak. That's too bad - I always wish daffodils would stick around longer. In college, I used to go to the store and buy several bunches at a time when they were on sale and put them all over my dorm room. 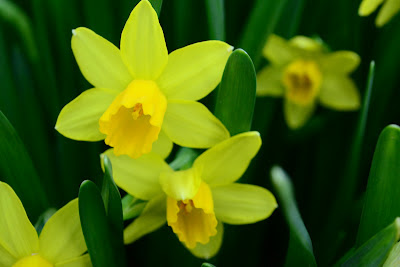 However, spring also means it is time to start planting the garden. The lettuce seeds I planted a couple of weeks ago are up, and the carrots are about to sprout and the peas are in (although, they and the carrots probably should have been in a couple of weeks earlier). I have collards, onions and beans to plant too, and of course we will have tomatoes and jalapenos. Probably broccoli too, if we can find good starts. Ooh, spring!
Posted by Hope at 3/07/2012 11:57:00 AM No comments: 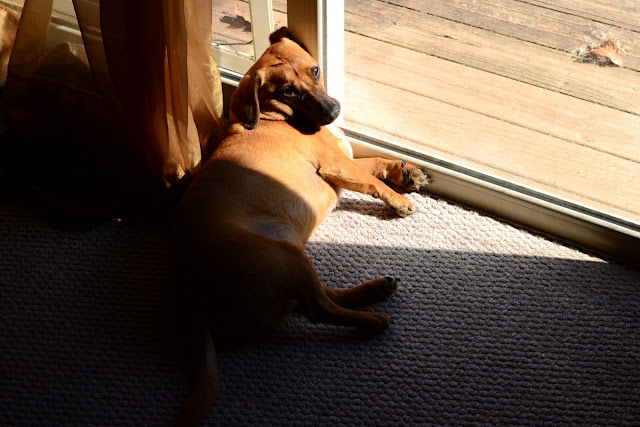 Miikka loves a good sunbeam as much as an cat. In the mornings, a nice big one moves across our living room floor, and given the chance, he will follow it. To the bitter end, as you can see above. Once it disappears completely, he usually goes outside to bask on the deck. Some days, Creamsicle is right there beside him in the sunbeam.
Posted by Hope at 3/01/2012 03:32:00 PM No comments: