I wish I had something interesting to post, but I don't. I have been taking some pictures, but they are all still on my camera. I haven't baked anything since this weekend, and the bread I baked was OK, but nothing to write about. Mostly, I have been going to work, coming home to play with the dog (or fight with him over our daily walk...he is being an adolescent, and it is a pain), making and eating dinner, and going to bed. This time of year is sort of difficult to write about. Spring isn't here yet, winter isn't fully gone, but is on its way out. The weather is about all there is... It is sunny and 53 at the moment - a heat wave, compared to the past few days. But rain is supposed to come for tomorrow and the weekend.

We are going to see Cat on a Hot Tin Roof tonight at a Little Rock theater. That should be fun, except for the part where I don't get home and into bed 2-3 hours after my normal bedtime, and still have to get up for work tomorrow...
Posted by Hope at 2/18/2010 02:18:00 PM No comments:

The snow finally started melting in earnest yesterday - our backyard is now a large mud puddle that Miikka tries to bring into the house on a regular basis. Someone will be having a bath soon!

I have been doing a lot of baking since the snow started. Last weekend, before the snow, I made a loaf of egg bread - a nice, light sandwich loaf. On Monday, day one of being snowed in, I baked a (small) batch of chocolate chip cookies. Those didn't last out the week. On Tuesday, I baked banana bread. Yesterday, I baked brownies. I have to confess that these were brownies out of a box, but they were Ghirardelli, and they are very good. Today, I plan to bake a loaf of cracked wheat bread from a recipe I found on the New York Times. If it is good, I will try to remember to link to it.

Tomorrow is a sort of holiday at work - it is President's Day, which is a federal and state holiday, but since the Arkansas State Legislature is in session, state agencies have to at least have a skeleton crew. I volunteered, because it means I can take a day off later, which I am going to do so I can go to Austin with Benjamin at the end of March. To reward those of us to come in, I have decided to bake my favorite pumpkin muffins. Good thing I have been walking a lot and going to the gym.

For our Valentine's Day dinner tonight, we are roasting a Falling Sky Farms chicken, the same chicken used by Ashley's at the Capital Hotel - only the best restaurant in Little Rock (in my humble opinion). I used to be scared of roasting a chicken, but since we have been buying chickens at the Conway Locally Grown Market, I have gotten pretty good at it. It helps to have such good, fresh chicken to work with. Anyway, we usually have the chicken with roasted potatoes and carrots, then use the leftover for another meal, later in the week. So good.

My other food obsession lately has been oatmeal pancakes. I discovered them on Orangette, and fell in love. We made them for breakfast today, and I can't wait to have some of the leftover pancakes later this week for breakfast... 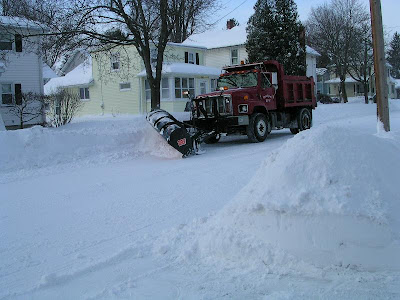 We don't have one of these in Maumelle.
So, we are stuck at home for a second day. I am not going to complain too much, because I am always happy to not go to work, but I do have one observation...if the cities around here had more experience clearing roads, nothing would have to be shut down. I know this is the same criticism leveled at D.C. during their current snowpocalypse, and it is completely true.

Maumelle has a snow plow - I saw it working yesterday. But it only did the major roads, and those only in the morning. It was slushy all day, up until the late evening, so the roads could have been cleared, or at least salted or sanded. The only reason no-one can get around is that the roads are covered in frozen slush. This would never have happened in Brockport.

We aren't supposed to get above freezing until tomorrow, and it is supposed to snow again on Thursday. This is turning into an interesting winter.
Posted by Hope at 2/09/2010 07:05:00 AM No comments:

Scenes from a Snow Day 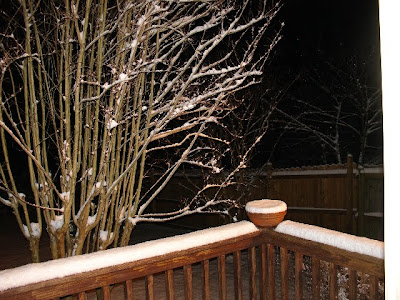 5:15 AM, Back deck
We are having another snow day today. That is two in less than a month! It is really coming down now, with at least four or five inches on the deck. 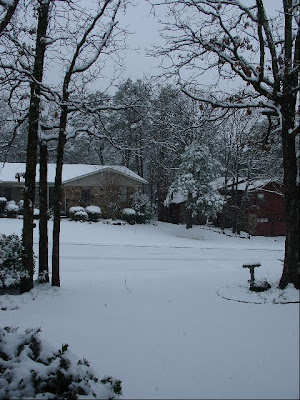 11 AM, view out our front door.
I have already taken the dog for a very slushy walk (it was sleeting at the time, not snowing), and baked a batch of chocolate chip cookies. 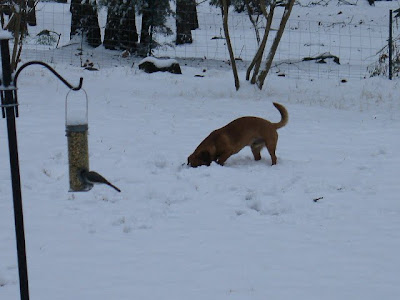 Miikka digging in the snow, of course.
Benjamin is home too, and we are about to have grilled cheese sandwiches for lunch. Is there a better snow day lunch? 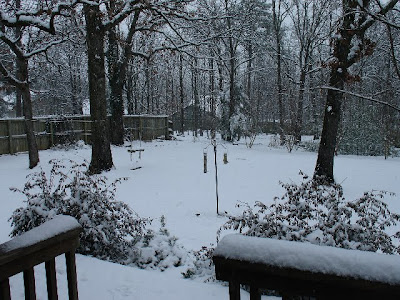 I am putting this slight rant out into the world in the hopes that it will have some sort of karmic effect on the problem: While we were in Bellevue over Christmas, we took a trip to our favorite used book store and bought some books. And, since it was Christmas at the Donovan household, books were also given as gifts. Too many books to be carried home in our suitcases. So, I packed them up into a box and mailed them to Maumelle using the inexpensive media rate. Over a month later, they have not arrived.

I have never had this kind of problem with the post office before. I have used the media rate many times to send and receive books, and they always arrived within a week or so. I want my books! Are you listening, guardian angel of the post office? Send me my books.

Email ThisBlogThis!Share to TwitterShare to FacebookShare to Pinterest
Labels: rant 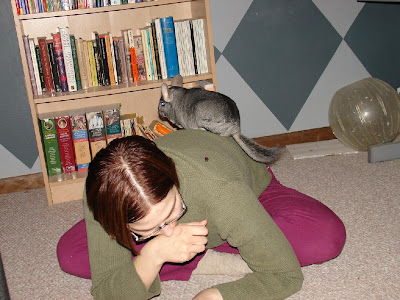 Kirby has really come out of his shell lately. When I first got him, he wouldn't come anywhere near me. After a year of sitting with him every evening, he now hops all over me. 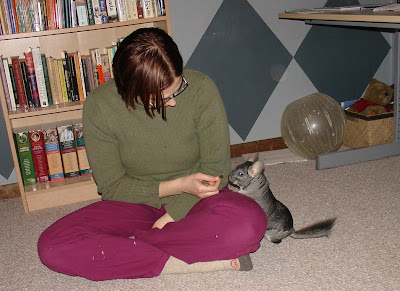 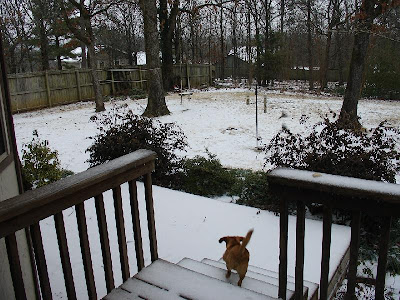 Friday, mid-day, before the snow.

Icepocalypse 2010 2.0 actually happened! Friday we woke up to falling sleet, slick roadways, and a day off work. The sleet continued to fall all day, finally changing to snow around bedtime. 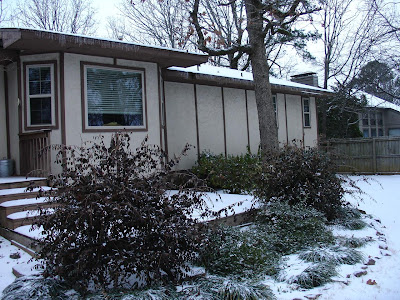 Look closely and you will see some little icicles.

Our backyard was covered in snow, and it actually stuck to the road, for once. 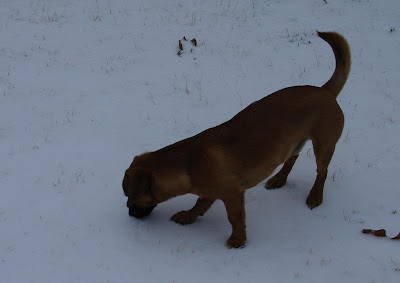 Yum yum! It's like an ice cream cone, without the cone!
At first, Miikka wasn't sure what to make of the cold white stuff - Friday morning, he refused to potty outside, instead peeing on the carpet, but by mid-morning, he had the hang of it. The cold didn't seem to bother him a bit, as long as he kept moving, patrolling his borders and chasing the squirrels who came to pilfer bird seed. 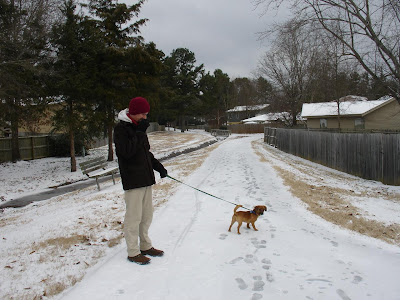 What are you waiting for? There is more snow to eat!

We braved the cold and sleet to get some exercise on Friday, and Miikka was as happy as a clam, err, polar bear. This picture was taken before the snow got started - by Saturday, you couldn't see the grass. 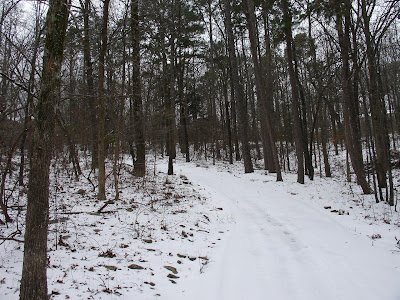 Hill 'o pain - why does it never get any easier?
This is the steep path up the side of our hill - we climb this just about every day. This weekend, Miikka had it a lot easier, what with his four-paw drive. We slipped along behind. Too bad he isn't really big enough to pull us up (although he does try). 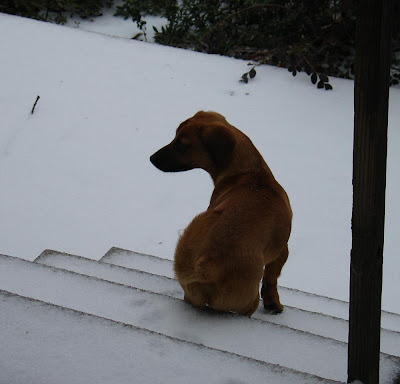 And so, we enjoyed our time with snow and ice. I got my desk cleaned off and the papers stacked on it filed away. We made beef stew, and I baked bread and snack mix and granola. We watched lots of DVDs. Now, it is back to work and back to normal, thanks to the sun yesterday that cleared most of the roadways, although people are still driving as though they could spin out at any moment. Ah, Southerners...
Posted by Hope at 2/01/2010 08:45:00 AM No comments: