OK, here we are - I got the Philadelphia trip pictures off of the camera, and even managed to get a bunch edited down. Since there were a lot of them, and they sort of fall into themes, that is how I will be presenting them to you. If you don't like it, and were expecting a chronological tour of my time in Philly, too bad. (Actually, if you do want such a thing, I'd be willing to show them to you after dinner some time, the way my father used to show slides to dinner guests when I was a kid. I promise not to get mad if you fall asleep, the way both my grandmothers used to do.)

One thing Philadelphia has a lot of is statues. They are everywhere - downtown, on the campus of the University of Pennsylvania (the above statue actually has multiple copies - one downtown and one on the campus), in the historic district, and even above the entrance to a parking lot, like this one. 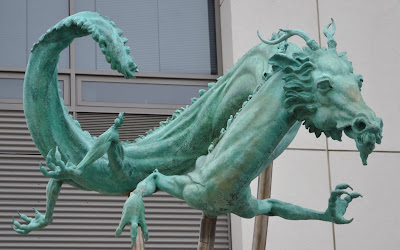 This guy was one of a pair in the Chinatown area, guarding a rather nondescript parking lot. Well, nondescript apart from the twin dragons. Our parking lots in Little Rock are rather less distinguished.

There are, of course, many statues of famous people, like Benjamin Franklin (who lived a good portion of his life there, and did lots of civic-minded things for the city):

Both of these statues are on the campus of the University of Pennsylvania, although I am sure there were others that I missed in the city itself. I rather like Benjamin Franklin (and it has nothing to do with the fact that my husband's grandfather is Benjamin Franklin Rider). He was intelligent, civic-minded, curious, and must have had a wicked sense of humor.

I'm sort of sorry I was alone when I took this picture, because it would have been neat to have a picture of me sitting with him (no, not in his lap! What kind of person do you take me for?)

And of course, what would a trip to Philadelphia, cradle of the Declaration of Independence et al, be without a statue of George Washington? Here he is outside of Independence Hall. The guide on that tour (you'll have to wait until I get to the "historical sightseeing" theme for those pictures) pointed out that there are no statues of John Adams (my distant relative) anywhere in Philadelphia, and sounded a little bitter about that. Hmm.